Tons of great stuff in stores this week for the comic fans among us. 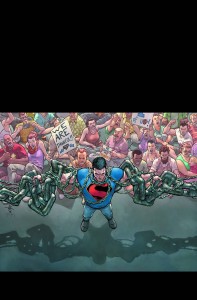 It’s a flat-out terrific week for fans of… just about anything really.

Are you into The Witcher? Issue #4 of the 5 part Fox Children limited series from Dark Horse hits this week, and is a can’t miss for fans as it amps up the weird factor quite a bit. Following Secret Wars over at Marvel? Then you do not want to miss Secret Wars #4 as the Marvel U-altering mini-series ramps up into its second half.

DC superheroes fan? Check out Action Comics #42 as Superman deals with the continuing fallout from having his cover as Clark Kent exposed (hint- some folks aren’t happy with him), Batman Beyond #2 where Bats battles the debuting Inque, and He-Man: The Eternity War #8 which sees the origins of Skeletor as a member of the Horde (it’s a flashback issue).

Lots to dig into today, so plan your trip to ye olde comics shoppe accordingly, and maybe clear away some of that schedule. You can find the full list of what’s on the racks here, and as usual, read more of what I’ll be picking up below.

Jason's been knee deep in videogames since he was but a lad. Cutting his teeth on the pixely glory that was the Atari 2600, he's been hack'n'slashing and shoot'em'uping ever since. Mainly an FPS and action guy, Jason enjoys the occasional well crafted title from every genre.
@jason_tas
Previous An all-new era begins for the Eternal Warrior this November
Next Shovel Knight digging up physical release for consoles and handhelds