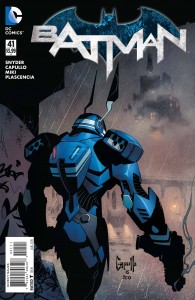 Clearly the biggest book hitting the stands this week, is DC Comics’ Batman #41. The latest in the post-Convergence revamps that have seen Superman take a massive power hit and Green Lantern go on the run, Batman #41 recasts the role of the bat. A new character (who you know well) takes up the mantle as a city-funded project to keep a Batman on the streets in the face of the real thing’s apparent demise at the conclusion of Endgame.

Whether Batman is really dead or not (ahem) is besides the point for now, as the new Dark Knight dons a mechanized suit of Bat-armor developed with the goal of kicking some criminal butt. Snyder and Capullo have steered Batman to some new heights under the New 52 banner, and it looks like this radically different direction  will be equally interesting as New-Bats is already getting some excellent buzz.

Just how long it’ll be that the new Cape-less Crusader stays in the suit is anyone’s guess, but this is definitely one to enjoy for the time being as the book should bring a whole new attitude to the city of Gotham.

On the other side of things, we have the massive universe-twisting epic of Secret Wars. Marvel’s biggest event book in a long time is also shaping up to be one of its best. And even if you’re not into crossovers, it’s one to keep an eye on as there’ll be an all-new, all-different Marvel U left in its wake.

This week sees a ton and a half of Secret Wars crossover issues, so pick up what you like, but make sure to take a look at Ultimate End #2 and Secret Wars Journal #2 as both should have a decent level of expansion for the main story.

Those are my can’t misses of the week, but here the rest of my picks for today’s trip to the shoppe, and here’s the full listing, should you like to peruse.

Jason's been knee deep in videogames since he was but a lad. Cutting his teeth on the pixely glory that was the Atari 2600, he's been hack'n'slashing and shoot'em'uping ever since. Mainly an FPS and action guy, Jason enjoys the occasional well crafted title from every genre.
@jason_tas
Previous Halo 5’s DLC maps to be offered as free. Yes, FREE
Next ZombiU might be on the way to modern consoles