Take a preview look at what Valiant Comics has on tap for FCBD tomorrow. 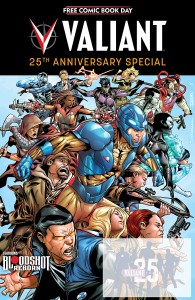 Valiant’s 25th year is going to be the biggest one yet! The silver anniversary celebration begins right here on Free Comic Book Day! Bloodshot, X-O Manowar and the rest of Valiant’s fearless heroes are taking center stage for a star-studded, jam-packed anniversary smash celebrating 25 years of Valiant comics!

The year’s can’t-miss celebration officially kicks off on May 2nd in the FCBD 2015: VALIANT 25th ANNIVERSARY SPECIAL – featuring two all-new stories and a myriad of never-before-seen special features chronicling Valiant’s storied place in comics history! First, New York Times best-selling writer Jeff Lemire and blockbuster artist Butch Guice chronicle the devastating fallout of THE VALIANT as Bloodshot rises from the ashes to unleash a never-before-seen prelude to BLOODSHOT REBORN! Then, Valiant superstars Robert Venditti and Rafa Sandoval throw down the gauntlet for an action-packed introduction to the world of X-O MANOWAR and an all-new tale of DEAD HAND! Plus: Ninjak; Imperium; Divinity; Ivar, Timewalker; Rai; special guests from throughout Valiant’s decades-long history; and a cavalacade of special surprises!

Jump on board here to relive the ground-breaking journey that established Valiant as the largest and most acclaimed independent universe in comics – and witness the action-packed first steps toward 25 more history-making years!

As usual, there’s quite a bit to be excited about tomorrow, as Free Comic Book Day is loaded for bear as usual. Valiant has an excellent looking book in store for freebie-grabbers too as the FCBD 2015: Valiant 25Th Anniversary Special has quite the roster of tales, which you can see in the preview text above.

No rehashes here, or reprinted stories, as all of the tales printed in the book will tell some pretty important fill-in tales. The publisher also promises plenty of surprises as well, which should whet the appetite of fans nicely. And also, it’s free. Did I mention that?

May 2nd is Free Comic Book Day, so get on down to your local comics shop nice and early to get the goods tomorrow. Happy reading!

Jason's been knee deep in videogames since he was but a lad. Cutting his teeth on the pixely glory that was the Atari 2600, he's been hack'n'slashing and shoot'em'uping ever since. Mainly an FPS and action guy, Jason enjoys the occasional well crafted title from every genre.
@jason_tas
Previous Meet Warhammer: End Times – Vermintide’s 2nd playable hero
Next Welcome to Halloween in May on BG!