Taking center stage among Batman’s rogues gallery in Arkham Knight is Scarecrow, and DC Collectibles has a star of an action figure to go along with with that newfound fame. 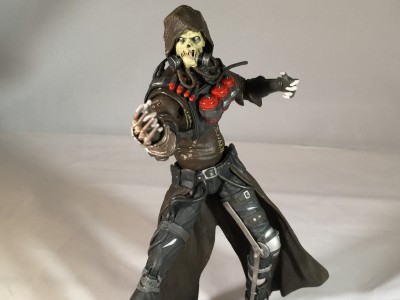 Not that Scarecrow isn’t a big time Batman villain, he kind of is, but he’s not had a massive role in any of the previous Arkham video games. His appearances have definitely been impactful, as Batman has had his head befuddled by poisons courtesy of the former psychologist. That all changes in Arkham Knight though, as Dr. Crane has gotten serious and organized many of Gotham City’s psychopathic residents into a (presumably somewhat) cohesive group. Their goal of course, is to eliminate the Batman.

As designs go too, this version of Scarecrow is a pretty awesome one and befitting a creep of his current stature. The Arkham Knight Scarecrow has one of the spookiest looks he’s ever had, outside of his freaky third incarnation on the old Batman: The Animated Series TV show. Actually, he carries over some of the elements of that look, which you’ll see as we move into this review.

Honestly, he’s just plain old awesome looking overall. Scarecrow is covered in stitched together clothing, with his cloak and hood all bearing stitch marks. This is one of those classic elements of his costume that he’s really always had. It’s a cool element that really conveys that ‘scarecrow’ look well. 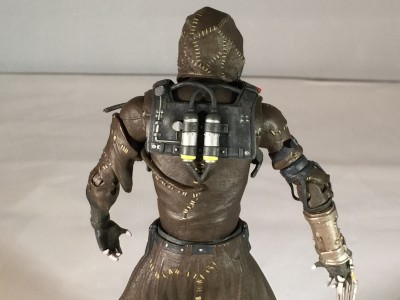 His pants are a little different in that they’re a basic black, but with a number of excellent looking embellishments. He’s left leg is encased in a heavy brace, presumably necessary from all the brutal beatings he’s taken over the years, and his boots are untied and sloppy, fitting in well with the rest of his clothing. Much like with Batman (which I reviewed here), the number of little details from sculptors Gentle Giant makes an impact with this figure. You can pull back the hood to reveal the full mask that Scarecrow is wearing, and you can clearly tell it’s a mask as his neck is a totally different tone . He’s covered with buckles, pouches, hoses, and tanks too… lots of tanks.

Scarecrow has gas canisters on his chest and mounted on his back. Hoses run from his gas mask (which is hidden under the fright-mask he wears) into the tanks on his back, which I assume are supposed to contain oxygen. On the other side of that, I’m guessing the ones on his chest are something a little… nastier.

There are also a few little vials that run up his right shoulder and, of course, that awesome glove armed with syringes on the fingers. Just the thought of that thing… Anyway, take all of that together, and you’ve easily got one of the coolest looking Scarecrow figures ever.

On the articulation front, Crane isn’t quite as flexible as the Batman figure from this line. That’s not to say that he’s really lacking all that much, he’s just not as well off as Bats. You won’t find double-joints on the elbows or knees, but what’s there is solid, with both joints and swivels. 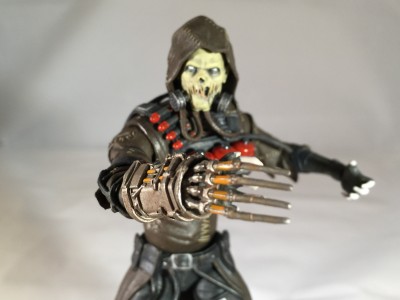 One thing I really didn’t like was the extremely limited movement on the torso. I understand, again, that this guy isn’t Batman and doesn’t need to have that kind of range of motion, still though, the ‘rocker’ the joint at the waist moves well side-to-side and that’s about it. It does move back and forth as well, but just barely, so kind of a bummer there.

There are also bicep swivels here (what can I say, he’s swively!) and articulation at the wrists. He hands don’t have an up and down range of motion though, also unlike Batman. There’s also not too many accessories present in the box. In fact, the only thing he comes packed with, other than himself, is an extra mask. 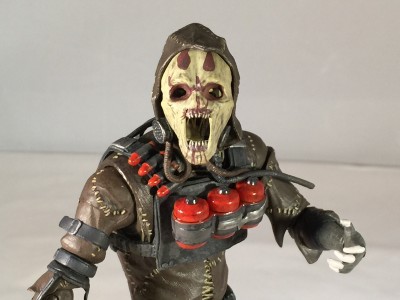 I actually have no idea why he comes with a spare mask. Maybe he uses it in the game? I will say this about it though, it’s freaky. Really, really freaky. It can also fit on his head if you remove the flexible hood, and it looks pretty cool on him It does’t make too much sense that he’d need a third mask on (gas mask, fright mask, and… second fright mask), but it might make perfect in a few weeks when the game hits.

This is shaping up to be a pretty awesome series from DC Collectibles. As the main villain from the game, Scarecrow looks every bit the part in figure form. He’s creepy looking, has loads of great little sculpted on details, and some really cool elements like the hood that you can pull back and that great hypo-glove. And, although I don’t really get why he has it, that spare mask is pretty sharp too.

All in all a terrific figure, and an awesome addition to the first Batman: Arkham Knight series from DC Collectibles.

Jason's been knee deep in videogames since he was but a lad. Cutting his teeth on the pixely glory that was the Atari 2600, he's been hack'n'slashing and shoot'em'uping ever since. Mainly an FPS and action guy, Jason enjoys the occasional well crafted title from every genre.
@jason_tas
Previous Mod Creators Can Now Charge For Their Mods on Steam
Next An Actor`s Journey: An Interview with Yuri Lowenthal