Swords and Demons and Guns?! What more could you want? 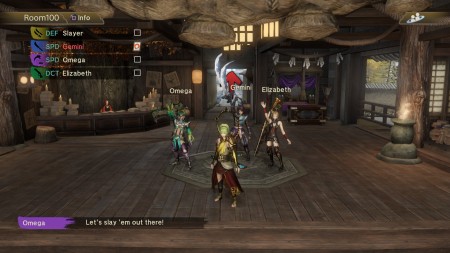 Toukiden: Kiwami is an update to 2014’s Toukiden: The Age of Demons and features upscaled graphics, more demons, more characters and a brand new story towards the ending of the original game. While the original Toukiden was an awesome game in its own right, Toukiden: Kiwami ups the ante and delivers an even more engrossing tale, beautiful graphics, and the ability to cross-play with your PS Vita toting friends.

Toukiden is an Action Role-Playing game similar to Monster Hunter or Freedom Wars, and was developed by the good people behind Dynasty Warriors. As such, the gameplay is simple; you hunt down demons, you purify them to pick up their loot (Weird but it makes sense, lore-wise), you go home and build/upgrade your equipment, and then you proceed to develop your relationship with your Demon Slaying Colleagues.

The visuals of the game are breathtaking for a PS Vita upscale. The lighting is incredible, the colors are actually pleasant to look at and the best part about it is that the game seldom slows down during even the most intense moments. Oh, and everything runs silky smooth at 60 fps. The attacking animation, reloading animation and basically everything about the game’s animation-style is wonderful as well! If any of these has to have a definite weakness, it would have to be the fact that the characters don’t actually move during those rare bathing moments (more on that later), but that’s a very minimal complaint of mine as it doesn’t really affect the gameplay. 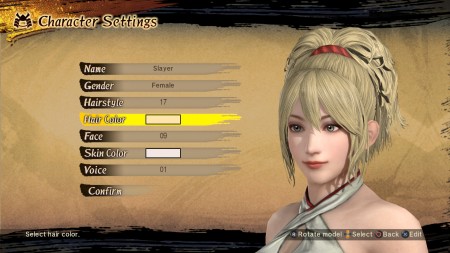 The various monsters are actually pretty well designed this time around too. Though it is a given that the grunt mobs are generic and repetitive, the boss monsters are where the real action is at. These bosses range from slightly bigger than a human being, to Attack on Titan scale, but above all else, it’s their traditionally Japanese designs that piqued my interest. They are all well-made and they are all awesome in their own right, and systematically dismantling them with my party actually made me cringe every few times or so. Some of them are just so downright creepy that even I, who traversed the pits of Hell in Doom, actually had to make a face every time I saw that damn Spider demon as it slowly wriggled towards me and my party.

Speaking of the well-designed and the beautiful, worth noting are the characters themselves. Sure, most of them are pretty boys and girls but what got me really interested is the wonderful direction the team behind Toukiden took to develop these characters. They all come complete with their own back stories, tragedies and, eventually, redemption. So all of the characters definitely bring something interesting to the table – and it definitely helps that they look good doing it.

Also, the Mitama or Spirits, which essentially add as stat boosters, are all very well designed as well. Redesigning both mythical figures and historical figures for the modern era must have been a daunting task for the developers at Omega Force, but it paid off.

Personally, my favorite party member is Nagi. She’s well-read, quirky and intelligent, and her background as a teacher intrigued me.  I also appreciated her constant rain of arrows which would sometimes critically hit an enemy boss and then stun them long enough for me to release my own flurry of attacks to devastate them, as I surgically cut off one part after another just so I could build my ideal armor and weapon set. 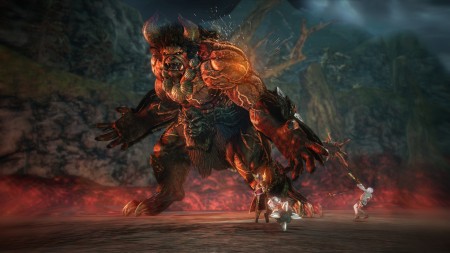 The music in the game is as Japanese as you could ever get – and that’s a good thing. Imagine living in the aesthetically beautiful world of Princess Mononoke while killing demons – wouldn’t your chill out iPod playlist include a lot of wind instruments and percussion? I definitely enjoyed listening to the game’s OST and in fairness to the production team, they did know when to make the songs tense and when to make them playful. Overall, it adds to the wonderful storytelling present in the game and it makes the otherwise repetitive task of farming for loot fun and eventful.

As for the voice acting in the game, it’s actually very impressive! The cast is rounded out by an all-star Japanese list of talent and their line delivery and portrayal of their respective characters is impressive and one of the best aspects of the game. There’s no doubt that this definitely adds to the narrative.

The controls are actually quite simple to understand, but difficult to master, especially with the lack of a proper tutorial in the game. Fear not though! Yamato, one of the characters in the game, actually offers a detailed training regimen for basic movement and more advanced weapons training for each and every weapon class available – but this feature comes way beyond the ‘tutorial stage’ of the game. It does not impact the game itself either, and I actually learned how to kill demons efficiently on my first or second mission, though beginners may have a harder time of adjusting. 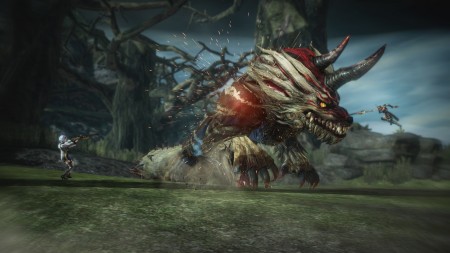 Otherwise the gameplay is very straight-forward. You are a Demon Slayer. You kill demons and systematically cut apart their generals. You salvage whatever they drop so that you can build or upgrade your equipment. You can send out your troops or your cute little Tenko, to scavenge around the various battlefields while you are away on a mission, and you can also develop your town… albeit in a limited manner constricted to the bath area, the spirit tree behind your home, and the offertory box inside the Slayer building. You spend your time by doing missions and fulfilling quests, and at the end of the day, you face a boss as big as your house. Pretty fun stuff!

The plot is well made and is better than most of the more recent Action RPG games. The world is constantly under siege by an army of Oni (Demons) that seek to overthrow the Human Race, and at the frontlines lies the village of Utakata, the final line of defense against the Oni horde. Originally, there were other villages aside from Utaka but most of them have already been overrun by the Oni so it is basically up to the player-customized Protagonist and his team of Slayers to save the world. It’s a simple but effective plot, but this is where it gets interesting – the plot is supported by a well written lore, and that lore is based on historical Japanese mythology. This perfect balance between reality and fantasy sets the game’s plot apart and exalts it on a level that it deserves.

Kiwami, on the other hand, is the expansion to Toukiden. It features everything from the original game plus the additional upscaling and more. It adds more characters and adds a sort of epilogue that begins at the end of the first game and sets the protagonist as a more matured Slayer compared to the first time he arrived at the beginning of the first game. It adds a good couple of gameplay hours plus dozens of multiplayer gameplay hours to the already long game. Toukiden owners can opt to transfer their data from to the Kiwami port and begin at the end or first time Toukiden players like me can experience the entire thing from the beginning to the end, which was a fulfilling experience if I may say so myself.

Not surprisingly, one of the highlights of the game is its multiplayer function. You may choose to finish the game on your own or replay various missions and different game modes with your friends. The possibilities are endless, and the players online are generally friendly I’ve found. The community is supportive and patient with beginners too, and that’s something to respect considering the freedom anonymity grants people.

All in all, Toukiden: Kiwami is an extremely fulfilling game to finish, and clocking in at least 80 hours for your playthrough is not at all skimpy. It’s just that good too and really fun the whole way through. The plot is extremely well written (more so for the lore), the characters are well developed, and the game itself is wildly interesting.

Check it out when you can and multiplayer your way to Slayer Godhood!

Benj likes video games, neckties and scotch. His favorite games include Resident Evil 2 and Final Fantasy VIII. You may contact him at [email protected]
@ggburroughs
Previous Phantom Dust developer was finished off by Microsoft’s ever changing vision
Next GOG.com raises a tower of bundles with deep discounts