Hayden Christensen and Nicholas Cage star as washed-up Crusaders in this tale of royal betrayal set in middle ages China. 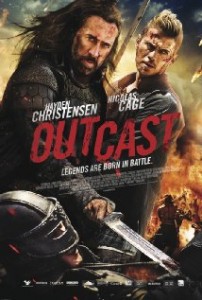 It kind of seems like Nic Cage makes about a movie a week at this point doesn’t it? Maybe it’s just me (probably not), but I’ve seen more films hit DVD and Blu Ray from Cage in the last couple of years than I did the last decade. Whatever the reason for this sudden prolificness is I don’t know, but the result has been a string of so-so films, and Outcast is the latest in that line.

Starting out in the middle-east during the Crusades, I don’t exactly know when or where as there’s not much of a description to any of the settings in the film, we meet Jacob and Gallain. Played by Christensen and Cage respectively, the two are as different as night and day.

Jacob is brash and eager to fight and kill, while Gallain (his mentor) is losing his will to fight. The opening scene is loud, filled with combat, and some surprisingly good (and bloody) sword fights. Right from the outset though, you get the feeling that this was a film that wasn’t blessed with much of a budget.

It turns out that this is a correct notion, as is told in the special features, but more on that in a second; lets finish up with the actual film first. The majority of the movie is played out not in the mid-east, as you might assume form the opening, but in China. Maybe. Again, there’s no specific setting talked about or named during the movie, so you have to go by the generalities that splash across the screen at different times.

It’s definitely the far east though, and a tumultuous time in the far east at that. The king is dying, and his choice to succeed him isn’t his older and battle-hardened son, but his young boy who is more of a diplomat, and better suited to the burden of the throne. I don’t like to get into too many spoilers in reviews, so I won’t ruin events for you, but I will say that things don’t go great and this brings in Jacob and eventually Gallain, who must protect the young king-to-be as well as his sister.

The story isn’t bad at all actually, if a little basic. I actually liked the characters as well, although Cage’s Gallain was somewhat of a standard ‘reluctant hero type’. Some of the locations were downright gorgeous as well, and that cool sword fight I mentioned? That level of action pretty much stretches throughout the film. While we’re not talking ‘legendary’ fight scenes here, they were pretty much all solid and really enjoyable to watch.

As for the script, most of it felt rushed and not as well developed as it should have been. Some of this too is explained in the special features, which again we’ll get to in a second, but it makes the movie feel disjointed in some parts… I kind of felt like I missed something, if that makes sense. I also have to make mention of Cage’s scene-chewing acting, which is over the top almost throughout and ranges from fun to ‘facepalm’ levels.

His character also makes little sense, and his scenes are loaded with goofy elements. In one part he has twin snakes in his hands. Now, you might think that there’s something to that, that maybe he uses them to threaten his foes or something, but you’d be wrong because they’re never seen again and serve no apparent purpose. Some of this kind of stuff is part of the movie’s charm though, so keep that in mind. While we’re talking acting though, Christensen on the other hand is actually not bad at all here. And that stiffness that he’s often been sighted for in films actually works for the type of character that he plays.

Now, about those special features; it’s all typical stuff with trailers and interviews making up the bulk of what you’ll find on the disc in terms of extras. There is one exception that stood out, and I really enjoyed this part, in that the director Nick Powell was super-candid with the interviewer. Although you can’t hear the questions being asked (which comes off a bit awkward), Powell dishes out behind-the-scenes info that really make sense after viewing the movie.

For instance, the script was constantly being re-written throughout, with copious edits. Sometimes the team didn’t even know where they were going to shoot on ay given day as the locations had to be scouted in short order- and that’s a fact that makes the nice scenery I mentioned all that much more impressive. Powell also explains, among other things, that the his requests were often misinterpreted, and on occasion, nothing was done that he had asked as the custom in Chinese filmmaking is to do everything day-of, something that he wasn’t used to.

In spite of the fact that Outcast isn’t all that great of a movie, it is a fun one. Nic Cage was… interesting to watch, Christensen was solid, and the action was really enjoyable throughout. The story was decent as well, and with just a little more time to smooth things out, could have been way better. And again, I really liked the interview with Powell, who didn’t spare too much in his description of the filming process.

So overall, not too shabby, which was a bit of a shock to me, and a fun way to have a Sunday afternoon or late night movie session. I don’t know if I would advise you to go out of your way to catch Outcast, but if you should happen to spot the disc at your local big box, or on Amazon or something, it’s actually a good time.

Jason's been knee deep in videogames since he was but a lad. Cutting his teeth on the pixely glory that was the Atari 2600, he's been hack'n'slashing and shoot'em'uping ever since. Mainly an FPS and action guy, Jason enjoys the occasional well crafted title from every genre.
@jason_tas
Previous LET’S TALK ABOUT SAILOR MARS: AN INTERVIEW WITH VOICE ACTRESS KATIE GRIFFIN
Next The crew of the Enterprise meet the Green Lantern Corps this Summer