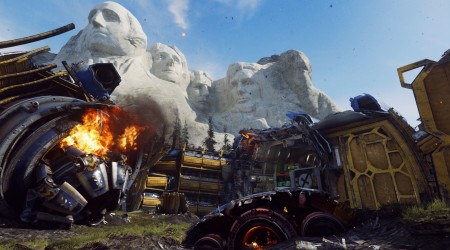 Ready for more Call of Duty: Advanced Warfare? The latest content pack, entitled Ascendance features more of what you’ve come to expect from these infusions of goodies, including new maps, weapons, and an additional story campaign with the continuation of the latest CoD zombies epic.

“Ascendance has it all, four all-new maps that were designed from the ground up for Exo abilities and the next chilling entry in the Exo Zombies experience.  We’re really excited and can’t wait to play with the community in just a couple of weeks,” said Michael Condrey, Co-Founder and Studio Head, Sledgehammer Games.

“The community response to Advanced Warfare continues to inspire us, and we’re pushing ourselves every day across all the teams to deliver our best.  Havoc was a great start for DLC, and we think Ascendance delivers even more of the nonstop action fans love,” said Glen Schofield, Co-Founder and Studio head, Sledgehammer Games.

More indeed. In terms of the new maps, there are four pretty awesome ones on tap.

Hardware fans won’t be too disappointed here either as they’ll have the “OHM directed energy light machine gun/shotgun hybrid, the OHM Werewolf custom variant, and the all-new Exo Grapple ability playlist that introduces the Exo Grapple ability to multiplayer” to play around with. And as for that CoD zombies map, well, it just might be the most star-studded yet and includes the same cast as the first installment that we met not too long ago in Havoc, which includes John Malkovich, Bill Paxton, Rose McGowan and Jon Bernthal.

Taking place on the outskirts of the Atlas facility seen in that previous episode, this map takes the quartet on a zombie-slaughtering mission into… a fast-food restaurant called BurgerTown? Sure, why not. Along the way, they’ll mete out justice to the all-new hordes via some new weapons and traps too, so it’ll be good fun all around. Unless you’re a zombie that is.

The Ascendance map pack hits Call of Duty: Advanced Warfare on March 31st for the Xbox One and Xbox 360.

Jason's been knee deep in videogames since he was but a lad. Cutting his teeth on the pixely glory that was the Atari 2600, he's been hack'n'slashing and shoot'em'uping ever since. Mainly an FPS and action guy, Jason enjoys the occasional well crafted title from every genre.
@jason_tas
Previous Dark Horse announces their packed lineup for ECCC this weekend
Next God of War III remaster on the way to the PS4