Not a bad week for some of the biggest characters in comics. The Amazo Virus arc comes to a close in Justice League, while The Valiant tosses almost envy hero that the Valiant U has at the Immortal Enemy. 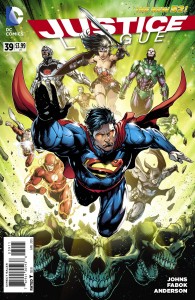 First, don’t miss Justice League #39. The book wraps up the Amazo Virus storyline and DC promises that there’ll be some consequences and repercussions. So, especially if you’ve been following along, this is a big one. While this is one that’ll have some of the most iconic heroes in the world in action though, Valiant Comics’ The Valiant will have just about every hero they’ve got in their stable.

An event book that somehow manages to feel more intimate and character-driven than most, The Valiant has been ramping up to this moment- the moment that the Valiant Universe’s greatest heroes let loose on the creature known as the Immortal Enemy. It’s going to be a throw-down that no fan of Valiant’s stories is going o want to miss out on.

Less of a ‘world shattering’ storyline, but nonetheless interesting, is Magneto #15 from Marvel. While the book is pretty much running under the radar on a monthly basis, the current S.H.I.E.L.D. storyline is a good one, and one that fans of the anti-hero should be reading. In the latest issue, the arc comes to a head as the agency has Magneto in custody, though that might not be the best thing for them.

Those are the books that you shouldn’t miss this week, but there are a few more that I’ll have in my buy pile today; check ’em out below. As for the full listing of what’s on the racks, click here as usual and head off to Previews’ official listing.

Jason's been knee deep in videogames since he was but a lad. Cutting his teeth on the pixely glory that was the Atari 2600, he's been hack'n'slashing and shoot'em'uping ever since. Mainly an FPS and action guy, Jason enjoys the occasional well crafted title from every genre.
@jason_tas
Previous Toy Fair 2015: DST shows off new Marvel Select, Minimates and… Ghostbusters
Next Blue Estate (Xbox One) Review