A pretty packed week for comic book releases, this fourth week in November has more than enough to keep you occupied while you wait for Thanksgiving dinner. 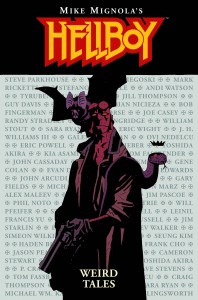 First off, I’m a huge Hellboy fan, so of course I’m going to mention the new hardcover book out from Dark Horse Comics. The collection of stories included here has something for just about anyone too, with spaceships, demons galore and more, so if you’re a Hellboy fan (or dig B.P.R.D. and Abe Sapien), try not to miss out. There’s a good number of tales here too, since the tome collects Hellboy: Weird Tales volumes 1 and 2, though if you’ve already read those books, this definitely is not a required addition to the old bookshelf.

Also in shops this week is the first issue of Gotham by Midnight from DC Comics. This first issue of the new ongoing series from DC delves into Gotham City’s more mystical side and follows Jim Corrigan (also known as the Specter) as he hunts down some high-strangeness in the city of the Bat.

And then there are the continuances of the ‘big arcs’ that are happening in comics at the moment. DC has new issues of Red Lanterns (which continues GodHead) and World’s End in storms,  while Marvel has new new Edge of the Spider-Verse crossovers on the racks along with even more Axis books.

It’s a big week, and that’s not even all that there is to highlight. Have a look below for more of what I’ll be picking up this week and then hit this link for the Previews website to see the full list of what’s on the way for this coming Wednesday, November 26th.

Jason's been knee deep in videogames since he was but a lad. Cutting his teeth on the pixely glory that was the Atari 2600, he's been hack'n'slashing and shoot'em'uping ever since. Mainly an FPS and action guy, Jason enjoys the occasional well crafted title from every genre.
@jason_tas
Previous Entertainment Earth unveils their Black Friday 2014 sale
Next New teaser trailer for Batman: Arkham Knight