Yes, Axis is still ongoing. And in the latest issue, the Avengers and X-Men have been cast as ‘inverted’ versions of themselves with only the Marvel Universe’s worst villains to stand in their way. Oh, and then there’s Apocalypse. 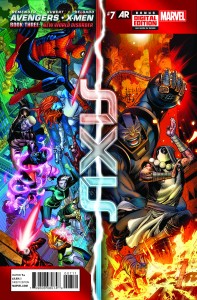 This December, heroes and villains clash like you’ve never seen before as Act III: New World Disorder kicks off in AVENGERS & X-MEN: AXIS #7! This is it! Blockbuster creators Rick Remender and Adam Kubert bring all-out war to the streets of Manhattan as Avengers, X-Men, the deadliest villains and more battle for Manhattan – and their very souls! Apocalypse has risen, an army of X-Men at his side. The Avengers have been inverted – their moral compass spinning hopelessly on its axis. And the world’s most vile villains now stand as the Marvel Universe’s only hope. Yet amidst the chaos the Red Skull, coupled with the awesome psychic powers of Charles Xavier has escaped his prison cell. Where has he gone? Who aided him? And what will he do now that he’s been set free? The pieces are on the board and the final battle is about to begin. Be there when chaos and disorder washes over the Marvel Universe in AVENGERS & X-MEN: AXIS #7!

Personally, I think this one’s going on way too long. That’s not exclusive to Axis though, as I generally think that ‘event’ books overstay their welcome in general these days. For it’s part, Axis is at least doing something to keep it fresh and interesting.

And by that, I basically mean the return of Apocalypse. One of my favorite villains form Marvel’s pantheon, Apocalypse is set to be the next big bad in the X-Men film series, and he’s all-together been missing from the comics for far too long. Now that he’s back and ready to rampage with that ‘army’ of inverted X-Men though, things should get very interesting indeed in very short order.

Avengers & X-Men: Axis #7 hits the stands on December 3rd from the team of Rick Remender and Adam Kubert.

Jason's been knee deep in videogames since he was but a lad. Cutting his teeth on the pixely glory that was the Atari 2600, he's been hack'n'slashing and shoot'em'uping ever since. Mainly an FPS and action guy, Jason enjoys the occasional well crafted title from every genre.
@jason_tas
Previous Hands on impressions with The Crew on PS4
Next Halo: The Master Chief Collection arrives on store shelves today