Home / Comics / Angela crashes headlong into the Marvel U in Angela: Asgard’s Assassin #1

Angela crashes headlong into the Marvel U in Angela: Asgard’s Assassin #1

Thor’s sister is on the run int he Marvel Universe. 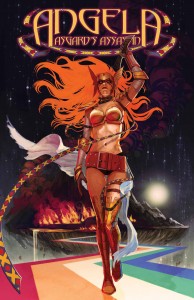 She’s deadly. She’s dangerous. And she’s getting her own solo series this December! Today, Marvel is pleased to present your first look atANGELA: ASGARD’S ASSASSIN #1, the explosive new ongoing series debuting this December! Launching as part of Avengers NOW!, the star-studded creative team of Kieron Gillen, Marguerite Bennett, Phil Jimenez and Stephanie Hans will show you a side of Angela you’ve never seen before, as she cuts a bloody path across the new and unfamiliar Marvel Universe!

The finest warrior in the Tenth Realm, she has been raised to hate Asgard with every fiber of her being. Training, preparing and waiting for the day when the war between Asgard and Heven would begin again. But following the events of Original Sin: Thor & Loki –The Tenth Realm, she must confront her true lineage. She is Odin’s daughter. Thor’s sister. Asgardian…

“The story is Angela is basically on the run,” says Kieron Gillen in an interview with Marvel.com. “It gives her a chance to interact with a lot of different people so by the end of the first arc we really get a sense of who Angela is vis-à-vis the Marvel Universe. You get a sense of who she is and where she fits into the larger picture.”

As the Marvel Universe’s newest star prepares to make her solo debut, no fan can afford to miss the bombastic adventures of the angelic warrior when ANGELA: ASGARD’S ASSASSIN #1 explodes into comic shops and digital devices this December!

For more on Angela: Asgard’s Assassin & Avengers NOW!, please visit www.marvel.com. Join the conversation on Twitter with hashtag#AvengersNOW and don’t forget to follow us at @Marvel [www.twitter.com/Marvel]!

Not originally a character from the Marvel Universe at all, Angela came over from Image along with her creator (long story there) Neil Gaiman. Gaiman has nothing to do with this new ongoing series though it seems, but his character will be a pretty big presence in Marvel’s comic books from the looks of things. Starting with Age of Ultron last year, there’s actually been little said about or seen on Angela till now, and it looks like Marvel will definitely be capitalizing on the former angel’s popularity in Angela: Asgard’s Assassin.

There could be a whole bunch of cool things happening with this one, including some fallout from Thor losing his ability to wield his hammerand having another claim the title of Thunder God. It’s hard to say whether Angela would be pleased with that or not, but blood is blood. It might take a while to get to that point though, as she’s going to be somewhat on the move thanks to being wanted y both Heven and Asgard, which probably isn’t the greatest position to be in.

Find out what happens when Angela: Asgard’s Assassin hits the racks with issue #1 on December 3rd form the team of Kieron Gillen, Marguerite Bennett, Phil Jimenez, and Stephanie Hans.

Jason's been knee deep in videogames since he was but a lad. Cutting his teeth on the pixely glory that was the Atari 2600, he's been hack'n'slashing and shoot'em'uping ever since. Mainly an FPS and action guy, Jason enjoys the occasional well crafted title from every genre.
@jason_tas
Previous Lucasarts comes to GOG.com with TIE Fighter, X-Wing and more
Next The Wolf Among US howls on PS4 and Xbox One