The tale of Punk Mambo gets a closer look as the priestess of the black arts heads home for a concert… and a little anarchy. 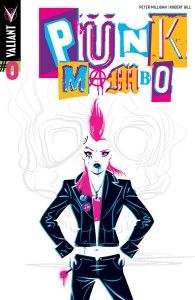 Oi! Valiant is proud to present an advance preview of PUNK MAMBO #0 – a sinister new one-shot tale revealing the origin of Valiant’s pogo-punk priestess from comics icon Peter Milligan (Hellblazer) and rising star Robert Gill (ARMOR HUNTERS: HARBINGER)! In the tradition of HARBINGER #0, SHADOWMAN #0 and X-O MANOWAR #0, explore the eerie beginnings of New Orleans’ most unorthodox practitioner of the dark arts for the first time anywhere on November 19th!

From a posh girls’ boarding school…to the slimy gutter of the London punk scene…to sniffing voodoo glue in a Louisiana swamp, how did Shadowman’s black magic bon vivant haul herself from the upper crust to the backwater of the Big Easy’s voodoo underground? Punk Mambo is about to head back home to spread some much-needed anarchy in the UK…and confront the ghosts of her past head on! The punks and the voodoo priests she used to know have cleaned themselves up, and she’s a loud, belching ghost from their past, come to break in the new furniture…and break some faces!

Featuring covers by Russell Dauterman (Thor), Rian Hughes (Batman: Black and White), and Kalman Andrasofszky (X-23), get up close and personal with the back alleys of the Valiant Universe in PUNK MAMBO #0 – in stores November 19th!

With all the love that Valiant has been showing to X-O Manowar, the stars of Harbinger, and the Unity crew, it’s nice to see some focus on the metaphysical side of the universe they’ve created. While Shadowman isn’t present in this one-shot issue, elements of his monthly title certainly are thanks to the focus being squarely set on Punk Mambo.

And more than just being a crazy name and punk garb, Mambo is one of the most interesting mystics in the Valiant U. If you’re into Shadowman, and you probably should be since it’s one of the best supernatural superhero books around, then Punk Mambo #0 is kind of a can’t miss. Catch it when it hits stands on November 19th.

Jason's been knee deep in videogames since he was but a lad. Cutting his teeth on the pixely glory that was the Atari 2600, he's been hack'n'slashing and shoot'em'uping ever since. Mainly an FPS and action guy, Jason enjoys the occasional well crafted title from every genre.
@jason_tas
Previous The X-Files Season 10 volume 1 (Graphic Novel) Review
Next Microsoft cuts prices on all US Xbox One bundles for the Holidays