I am not a fan of World of Warcraft, nor have I ever played it. So reading this book was a challenge to say the least. 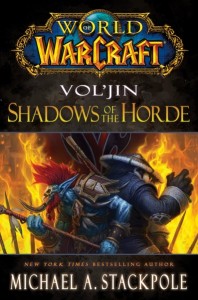 That fact was not at all helped by the author, Michael A. Stackpole, who seems to write for the sake of writing in this particular novel. At a fair 34 chapters, this is not a huge book, but with the insanely descriptive passages trimmed, I’m sure he could have told this story in as little as 20 (chapters), if that.

The story itself seemed pretty basic, a troll by the name of Vol’jin is betrayed by his clan and left for dead, then found by an old friend, Chen of the Pandaren, he is taken somewhere safe to heal. During that healing process, Vol’jin discovers many new friends, such as Tyrathan Khort, and many new things about himself that lead him to think about his life and what he is here for.

Shortly after, the land of Pandaren is invaded by another tribe of trolls. These are not so connected to Vol’jin, but they have heard of him, so there’s some relation there. With many lives at risk, the three heroes mentioned above plot a way to save the people of the land, and embark on many journeys. This is a NO SPOILER review, so I will not divulge any more plot than that, but it’s actually very interesting, with lots of magical sounding names and exciting events happening all over the place. There’s a love story unravelling as well, and even a few unexpected turns in the story, but through the overall drawn-out and somewhat poor writing, it gets a tad unbearable to read.

Stackpole is a well known and even renowned author, known especially for his fantasy work. This is the first of his works I have read, but I have to say, I am rather put off reading any other books by him afterwords. In theory this book would be very good for fans and non-fans alike since it comes from the pen of an established author, but with the way it’s written, in honesty you would really need to be a hardcore fan to make it through.

I felt almost drowsy reading this book, there are some parts that it are literally like Stackpole vomited every adjective he has ever heard on to one page. Over exaggerated descriptions of scenery, buildings, characters, weather… I could go on forever. His over use of the word pregnant was also something that was completely un-needed.

If this book wasn’t so long winded I think I could definitely have gotten into the story.

Essentially the plot is gripping, and if you were a follower of the game the characters would be very much relatable. Unfortunately, the excessive descriptions, and long introduction to the plot, just made the book much longer than it needed to be, and made the story seem to dawdle about and bore.

Only worth a read if you’re an avid WoW fan, or maybe if you have nothing else to do.

One of BG's UK contributors and a PlayStation super-fan, Kiri is self-described as "super competitive" and can be most often found shouting at her other half "kicking my butt on Injustice".
Previous Icon Heroes’ newest MOTU and Star Trek collectibles shipping now
Next Sherlock Holmes: Crimes & Punishments arrives on consoles and PC