Home / Comics / Take one last trip through time in Thor: God of Thunder #25

Take one last trip through time in Thor: God of Thunder #25

The upcoming issue is the last one for the Thunder God before the Thunder Goddess takes over in Thor #1.  And there are some very interesting tells about the future of the character that fans won’t want to miss. 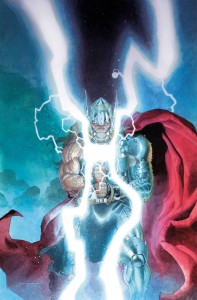 On a bellow of thunder and the crack of lightning comes the Thunder God, one last time! Today, Marvel is proud to present your first look at THOR: GOD OF THUNDER #25, the oversized final issue from New York Times Bestselling writer Jason Aaron as he assembles a bevy of the industry’s greatest artists for a titanic tale that should not be missed! Witness new stories of the Thor from each era as well as the untold origin of one of the God of Thunder’s greatest foes! Plus, before THOR #1 hits in October, be there when the new Thor makes her thunderous first appearance inside this epic, oversized issue!

First, it’s Young Thor vs. the Frost Giants as Jason Aaron and artist Simon Bisley (2000 AD) tell you a tale the brash, youthful God of Thunder as he wields his enchanted battle axe Jarnbjorn against the worst Jotunheim has to offer! Then, Aaron reteams with his artistic collaborator from Scalped, R.M. Guera, to bring you the blood-soaked origins of one of the God of Thunder’s most maniacal villains – Malekith the Accursed! Witness the untold origin of the ruler of the Dark Elves as he cuts a bloody swath across the Ten Realms in his rise to power and prominence!

Finally, as the Thor of today deals with the startling fallout of Original Sin, fast forward to the future as Aaron and blockbusterThor: God of Thunder artist Esad Ribic bring you a new tale of King Thor and the Girls of Thunder. Deep in the halls of Asgard, Thor’s granddaughters have uncovered a startling secret chapter of Thor’s past. A secret long since buried. Who is the new God of Thunder and why was her existence kept secret?

Be there when one chapter in the God of Thunder’s life reaches its end…and another begins. No fan can afford to miss out on the epic, oversized THOR: GOD OF THUNDER #25 when it thunders its way into comic shops and onto digital devices this September!

I happen to be something of Thor fan, and I’m also a purist who digs my iconic superheroes and villains. In that way, I’m not super-stoked for Thor #1, which issues in a new wielder of the Uru Mallet. I’ve said before, and I’ll repeat it again, this has zero to do with the fact that the new Thor is a woman. I simply do not like to see my heroes played around with too much.

That said, there are a few things here that definitely lead me to believe I’ll enjoy ‘Thor’ during it’s run with the new female main character. We already know that Thor as we know him isn’t going anywhere, he’ll just be different as he’s without Mjolnir. But looking at the summary above for the final issue of Thor: God of Thunder, you can see that there’s a definite timeline in place for Thor and whoever this new holder of the hammer may be.

Since the future King Thor hasn’t magically faded from existence, and the Girls of Thunder are looking into the Goddess of Thunder and her “secret” existence, it makes me think that there’s a lot more happening here than just the fact that Thor is somehow no longer worthy to hold his own hammer. Things are getting very interesting indeed.

Thor: God of Thunder #25 wraps up the run for the monthly book on September 17th from the team of Jason Aaron, Esad Ribic, Simon Bisley and Rm Guera, with covers from Ribic, Guera, Bisley and Milo Manara.

Jason's been knee deep in videogames since he was but a lad. Cutting his teeth on the pixely glory that was the Atari 2600, he's been hack'n'slashing and shoot'em'uping ever since. Mainly an FPS and action guy, Jason enjoys the occasional well crafted title from every genre.
@jason_tas
Previous Get a good look at Titan Souls in the new gameplay trailer for Acid Nerve’s roguelike
Next New Bravely Second footage