Hawkeye takes on Deadpool (sort of) in a Halloween murder mystery

The versus comic that isn’t, Hawkeye vs Deadpool #0 hits the racks next month. 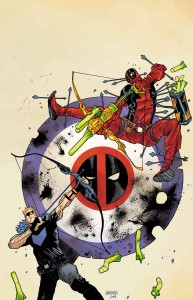 This September, the Avenging Archer takes on the Merc With a Mouth in a confrontation for the history books in HAWKEYE VS. DEADPOOL #0 – the first issue in a new limited series from critically-acclaimed Deadpool scribe Gerry Duggan and artist Matteo Lolli! This is the Hawkeye & Deadpool comic 75 years in the making! Give or take 75 years! A Halloween murder mystery and ad S.H.I.E.L.D. espionage mission is about to send these two on a collision course with destiny – and each other! Not to mention the desire to one-up the other!

“There is a real threat,” says series writer Gerry Duggan, in an interview with Marvel.com. “There’s a very important thumb drive that’s missing, containing details on the personal and family lives of S.H.I.E.L.D. agents. When different organizations hear about this, it becomes a bit of a dog pile.”

“There’s an expectation, too, with a title like HAWKEYE VS. DEADPOOL, that there will be a confrontation between these two,” continues Duggan. “I think we make that happen in a smart way. It’s not the same old take on the misunderstanding that often sends two heroes into conflict. We have a twist on that.”

Long ago, champions emerged to fight the evil that plagued humanity. Champions that fought for salvation, for all that was good and just in the world. Kind, generous and self-sacrificing – they were heroes. These are not those heroes… Who will win in this titanic clash of Avenger & X-Man? Two men enter. One man leaves. Then shortly after, the other man leaves! It all kicks off this September in HAWKEYE VS. DEADPOOL #0!

It’s the crossover that no one knew they wanted… but we’re getting anyway. Deadpool has been the character of the, well I was going to say ‘year’, but I think ‘decade’ might be a better choice of words. He seems to be crossing over into the lives of pretty much every hero in the Marvel U these days too, with Hawkeye being the latest.

I’m still not the biggest fan of the Hawk even after his big screen debut in Thor and Avengers and his very well-recieved title at Marvel. Even so though, Deadpool has a way of making everything a little more interesting and could be a great way to elevate Clint to a higher level in the comics universe. Then again, he might just be the target of about twenty Nerf arrows…

Find out which when Hawkeye vs Deadpool #0 (of a four part series) hits the retail bullseye on September 3rd from the team of Gerry Duggan and Matteo Lolli.

Jason's been knee deep in videogames since he was but a lad. Cutting his teeth on the pixely glory that was the Atari 2600, he's been hack'n'slashing and shoot'em'uping ever since. Mainly an FPS and action guy, Jason enjoys the occasional well crafted title from every genre.
@jason_tas
Previous Crimes & Punishments deduces a release date and a new trailer
Next Deathtrap presents Monster Training Academy