The Sentinel of the Spaceways goes home in Silver Surfer #4

Dan Slott’s revamping of the classic Marvel Comics character continues in a tale that sees the character going back to his formerly adopted home planet of Earth, complete with some pretty big name cameos. 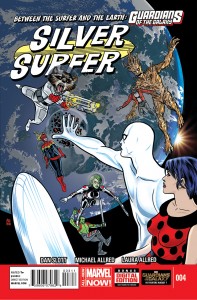 This July, the smash hit series of All-New Marvel NOW! continues in SILVER SURFER #4 – from the chart-topping creative team of Dan Slott and Mike Allred! They’ve journeyed the cosmos together, but now it is time to return Dawn Greenwood home. Only to do so, the Silver Surfer must travel to the one place in the galaxy he dreads the most – the Planet Earth! Only he gets a little more than he bargained for on the way. And what should be a quick drop off turns into a very strange adventure when the Guardians of the Galaxy get involved! Plus, don’t miss a guest appearance from two of the Surfer’s Defenders teammates – Doctor Strange and the Incredible Hulk! Don’t miss the book everyone is talking about this July in SILVER SURFER #4!

Oh those Guardians of the Galaxy, they’re everywhere all at once these days. Of course, it makes sense that they’d have a guest shot in a book like Silver Surfer since he’s floating around out in space… on a surfboard. It’s way more interesting though to see that Hulk and Dr. Strange are in this issue as well.

This book has been full of surprises since issue one under Dan Slott’s tenure, not the least of which has been the fact that the writer has managed to make the Surfer interesting again and very revenant in the current ‘Marvel NOW!’ Universe. It should be interesting to see what he does with the silver-hued one now that he’s back on Earth, maybe for an extended stay?

Catch Silver Surfer #4 from Slott and Mike Allred when it arrives on the racks on July 16th.

Jason's been knee deep in videogames since he was but a lad. Cutting his teeth on the pixely glory that was the Atari 2600, he's been hack'n'slashing and shoot'em'uping ever since. Mainly an FPS and action guy, Jason enjoys the occasional well crafted title from every genre.
@jason_tas
Previous Infinite Crisis gets the Last Daughter of Krypton as Supergirl enters the fray
Next Starling (Book) Review