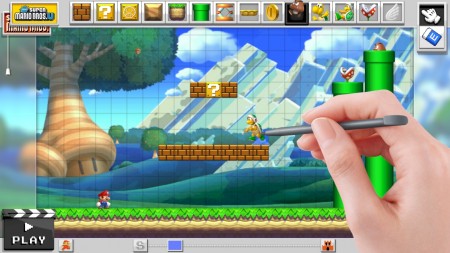 Leaked just before E3 kicked off, Mario Maker (which is a tentative title) has a whole lot more going on than anyone might have thought. Not only can you make classic SMB levels to your heart’s content, but you can also switch to New Super Mario Bros art style at any time. More than that too, you can place anything you can think of in any way you can think of.

So not only can you “place blocks, pipes, lifts and enemies anywhere” you like, but you can also build towers of Goombas, add wings to a Piranha Plant and pretty much anything else you can think to do in the world of Super Mario. As you’re building your level, you can also play test at any time and make ‘corrections’ to your design on the fly. Then when you’re done, you can play your new creation in either style, classic or New, on the fly.

Mario Maker is headed to the Wii U, but not till sometime next year, so expect lots more on this one before long.

Jason's been knee deep in videogames since he was but a lad. Cutting his teeth on the pixely glory that was the Atari 2600, he's been hack'n'slashing and shoot'em'uping ever since. Mainly an FPS and action guy, Jason enjoys the occasional well crafted title from every genre.
@jason_tas
Previous E3 2014: Disney Infinity adds Marvel characters galore and all-new features for version 2.0
Next Super Smash Bros Invitational tournament