Home / Comics / Ready for a butt-load of adventure? Here come The Delinquents

Ready for a butt-load of adventure? Here come The Delinquents

Valiant’s newest series matches up the world’s worst superhero team with the dysfunctional duo of Archer & Armstrong for a quest for treasure led by a magical map… made out of someone’s rear end. 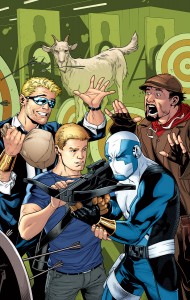 Quantum and Woody are the world’s worst superhero team. Archer & Armstrong are a mismatched pair of conspiracy-busting adventurers. When a mysterious force unites these ill-suited and irresponsible “heroes” for a cross-country race through the darkest corners of American mythology, all hell is bound to break loose. Can two busted pairs become four of a kind in time to defeat the Hobo King, save the day, and make it back home in time for happy hour? Let’s hope so…’cause these guys make a really, really bad team. (And you don’t even want to know about the Goat!)

Part of the Valiant First campaign where the publisher wants to boost its books up to the very top of your ‘read’ pile each and every week, The Delinquents has one heck of a lot of promise to be one of the funniest superhero books of the year. The main players in the miniseries, Archer & Armstrong and Quantum and Woody, are already some of the most smartly written characters in the medium and teaming the four of them up, well, it should make things extremely interesting to say the least.

And let’s face it, you can;t beat that premise. I mean, it’s a treasure map written on the skin of someone’s posterior… only in this book. The Delinquents #1 (of 4) hits the racks on August 20th from Valiant Comics and the team of James Asmus, Fred Van Lente and artist Kano. Oh, and don’t forget about they ValiantCraft alt cover by Donovan Santiago, that thing’s just plain spiffy.

Jason's been knee deep in videogames since he was but a lad. Cutting his teeth on the pixely glory that was the Atari 2600, he's been hack'n'slashing and shoot'em'uping ever since. Mainly an FPS and action guy, Jason enjoys the occasional well crafted title from every genre.
@jason_tas
Previous BroForce May update brings new bros and mech suits
Next The Nintendo Download brings Mario Kart, Mega Man and more