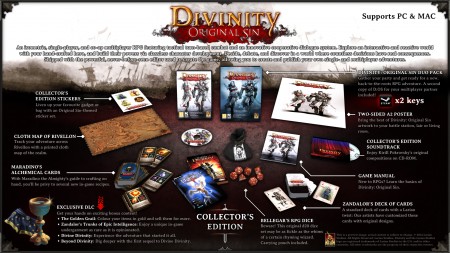 Available only through Larian’s online store, the Divinity: Original Sin Collector’s Edition is one serious chunk of gaming goodness. The box includes:

That’s a lot of stuff by anyone’s estimation and for any platform. The fact that it’s for a PC game, which really don’t even get boxed copies anymore, is just plain awesome. Should I take this opportunity to reminisce about the ‘big box’ PC games of yore? …eh, I don’t want to bore you to death in the middle of this pretty awesome announcement, so I’ll pass on that I guess.

Click here for more info about Divinity: Original Sin and here to order up a copy of the CE version of the game. You might want to hurry up and make up your  mind too, as Larian had 3,000 of these bad boys to sell, and 1500 were taken right off the top but he Kickstarter backers who helped the game to press. As for the remaining copies, who knows how fast they’ll be going…

Jason's been knee deep in videogames since he was but a lad. Cutting his teeth on the pixely glory that was the Atari 2600, he's been hack'n'slashing and shoot'em'uping ever since. Mainly an FPS and action guy, Jason enjoys the occasional well crafted title from every genre.
@jason_tas
Previous Batman: Arkham Knight trailer shows gameplay, Batmobile, and more
Next Max: The Curse of Brotherhood draws a bridge to the Xbox 360 and PC