Home / PC / Devolver Digital loads up with some Heavy Bullets

Devolver Digital loads up with some Heavy Bullets

The publisher announces an FPS with a decidedly retro vibe.

Heavy Bullets, now on Steam Early Access, is a procedurally generated FPS from developer Terri Vellmann. The game tasks players with resetting a security mainframe with a simple (yet “stylish”) pistol as the only weapon at their disposal. What’s more, you get six shots with that pistol before you have to buy more ammo, and it doesn’t seem like that’s going to be all that common of a possibility. If so, that’d definitely add in almost a puzzle aspect to the game. Pretty unique.

Heavy Bullets arms the player with a simple yet stylish revolver and six devastatingly plump bullets with the goal of resetting the security mainframe to restore order and reap the rewards of a job well done. To succeed in the game, players will need to move carefully and make smart use of their bullets, items, and the environment as rushing into new areas is the fastest way to get killed in the untamed wild of the neon corridors.

Vellmann has been updating and working on the game continuously since he launched the Alpha version of Heavy Bullets last September. A whole bunch of feedback has been taken into account as well from fans and players who’ve tried the game in that Alpha form, so there’s plenty to check out now, even if you did try out Heavy Bullets previously.

Heavy Bullets is up right now on Steam Early Access, as well as the Humble Store, and “other digital download services” and will cost you $9.99 USD. If you grab a copy now, you can also shave another 15% off of that, which makes for a pretty… heavy discount.

The final ‘retail’ release for Heavy Bullets is set for the PC this July.

Jason's been knee deep in videogames since he was but a lad. Cutting his teeth on the pixely glory that was the Atari 2600, he's been hack'n'slashing and shoot'em'uping ever since. Mainly an FPS and action guy, Jason enjoys the occasional well crafted title from every genre.
@jason_tas
Previous Classics, remakes, and more highlight this week’s Nintendo Download
Next Wolfenstein: The New Order launch trailer debuts 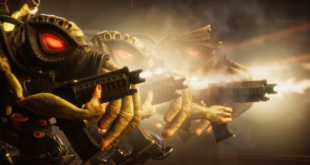 Trailer(s): The time is nigh for Oddworld: Soulstorm