Child of Light (Xbox One) Review

Many games today are geared toward “happy moments”, where the majority of the game has a happy and bright setting. Child of Light is not one of those games. 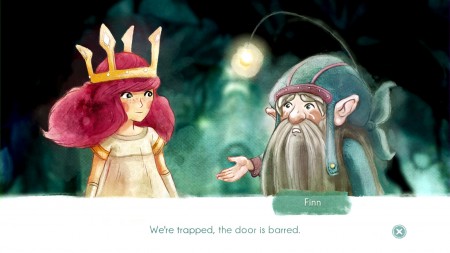 Ubisoft’s latest, the download-only Child of Light, tells the story of a young princess named Aurora.The princess went to sleep one night and didn’t wake up in her own world. Instead, she finds herself in a storybook world, alone and confused as to how she came to be there. The melancholy of the game makes the player appreciate just how good their lives really are. The doleful tones of the background music give the game a sense of eternal sadness and that image is helped along by the slow shuffling walk of the world’s inhabitants, as if they are forever trapped in depression.

Do not let the colorful artistic style fool you; do not hold your breath waiting for a joyful moment, for it will not appear. Child of Light is not meant to produce joyousness and happiness in the player. There is an impending feeling of doom and gloom throughout the story despite of the visual flair. Figurative and literal darkness resides everywhere, whether it’s in an underground tunnel, or the enemies you come across.

Fortunately, Aurora is joined by a companion early in the game, a firefly named Igniculus, who has the ability to light even the darkest of passages. The player controls both Aurora and Igniculus using both control sticks. Although hard to get used to at first, I eventually got comfortable with the control scheme. It is easy to forget that you have control over both characters though, and I found myself leaving poor Igniculus behind quite often. The game does support co-op play, which is nice, so if you have a buddy around who is willing to join you in the sadness, they can take over Igniculus for you! 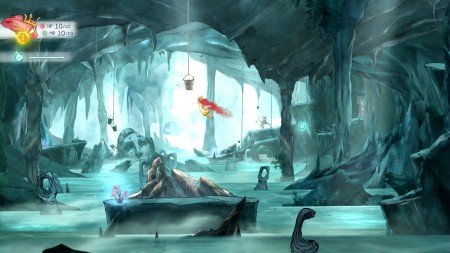 As the game progresses, so does Aurora’s abilities. She gains experience points for each enemy defeated, and after each level gained the player may choose a skill in the extensive skill tree. Battles are turn-based. However, you and your opponent race to attack first. Igniculus can help too by slowing down an enemy by hovering over them while you press the corresponding button. He can’t do it forever, though. His energy drains the longer you hold the button, and he can only recharge by special orbs that are hidden in sparkling, corral-like plants, which he can fly through to collect.

The battles are a nice change of pace compared to the rest of the game. For the duration of each battle, the music becomes more intense and exciting, making you forget how forlorn the world and characters truly are. But after the battle, reality comes back and slaps you in the face, complete with the same slow, depressing music as before. And that’s not a shot by the way as that’s the tone of the game and the developers at Ubisoft did a great job setting it.

As the game progresses, Aurora is joined by other companions, each with their own unique backstory. These characters can help in battles, but you must choose who can help and you can’t play with all of them on your team at once. They can be switched out when needed, or when they run out of energy.

Child of Light is a fantastic game that comes with a nice change. Too many titles focus on good feelings and happiness and it’s actually nice to feel pessimistic occasionally, especially when the world around you looks so inviting. The art is beautiful, almost like a stained-glass window.

The colors are vibrant and inviting, but also very misleading, as I mentioned. The music sets the tone wonderfully, causing no confusion as to what the player should be feeling while exploring the land. The environment has a dark and creepy feel to it, complete with gnarled trees and pitch black tunnels.

Overall, my experience was enjoyable despite the tone of the game. The replayability is not very high however and, although there are special texts to collect, they aren’t all that important to the main story. If you find them on your first time through, great. If not, no harm done as this is a trip you’ll probably only be taking once.

I am 24 years old. I work a full time job at a frozen pizza factory as a backup supervisor. My free time is mostly spent playing video games or playing soccer for fun during the summer. I'm really into history, especially early to mid-American history.
Previous Digital Cards for a Digital Age – 9 can’t miss card games on the App Store
Next DIABLO 3: ULTIMATE EVIL EDITION CONFIRMED FOR CONSOLES