Home / Comics / Marvel Comics announces another round of second printings

Marvel Comics announces another round of second printings

A bunch more of Marvel’s recent number ones and big impact issues are headed back to the presses. 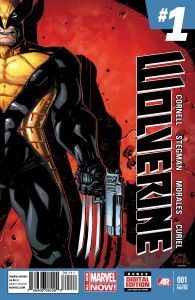 Marvel has been on a bit of a roll recently with its newest books. With Wolverine #1, Winter Soldier: The Bitter March #1 and the final few issues of Superior Spider-Man all selling out at the retailer level, the company has announced that these books will be joining the recently announced pile of additional titles on the second printing wagon for this coming March.

If you missed out and your physical comic collection needs to have some holes plugged, now’s your chance. Here’s what’s on the way… again:

Imagine that, a Wolverine comic selling out. So, so strange.

Jason's been knee deep in videogames since he was but a lad. Cutting his teeth on the pixely glory that was the Atari 2600, he's been hack'n'slashing and shoot'em'uping ever since. Mainly an FPS and action guy, Jason enjoys the occasional well crafted title from every genre.
@jason_tas
Previous Toy Fair ’14: NECA rocks the show with Aliens, Predator, Batman, BioShock and more
Next Toy Fair ’14: Bandai’s S.H. Figuarts impresses with Super Mario and more