Well, this one kind of came out of nowhere. 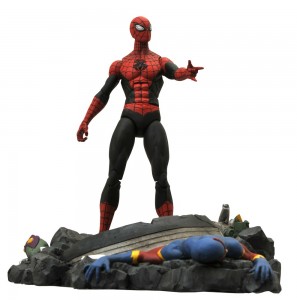 Superior Spider-Man’s days might be numbered in the comic books, but Diamond Select Toys has a brand new action figure of the Doc. Ock-possessed Spider-Man on the way as a Disney Store exclusive. Fans won’t have to wait long to get their hands on one either, as the figure is expected in stores and online this week.

“It’s a known fact that I’m a huge fan of Spider-Man,” said Diamond Select Toys President Chuck Terceira, “so the opportunity to make a new, more current Spider-Man figure for the Disney Store was a dream come true. Their support of the line makes great figures like this possible, and Sam really knocked this figure out of the park.”

Sculpted by Sam Greenwell, the figure stands in at 7″ and sports an impressive 16 points of articulation. Packed in with Superior Spidey is also a line-staple in the form of a very cool display base that shows off the aftermath of a battle with the revamped (and Ock-less) Sinister Six. As for the depiction itself, this is the first incarnation of Spider-Man while possessed by Octavius and he has the black and red color scheme (instead of the more familiar ‘Amazing’ blue and red) and the somewhat creepy faceted eyes that Ock installed in the suit.

You can pick up a Superior Spider-Man either very soon at brick and mortar Disney Stores (alongside the Winter Soldier, who is also up for sale right now), or on DisneyStore.com and MarvelStore.com right this minute.

Jason's been knee deep in videogames since he was but a lad. Cutting his teeth on the pixely glory that was the Atari 2600, he's been hack'n'slashing and shoot'em'uping ever since. Mainly an FPS and action guy, Jason enjoys the occasional well crafted title from every genre.
@jason_tas
Previous GOG.com charity drive takes in $1.9 million
Next Bound by Flame blazes on with new website and screens