One of the biggest brands in the world for kids (and plenty of adults) since 1996, you better believe there are some Pokemon toys landing at retail for the latest game release. 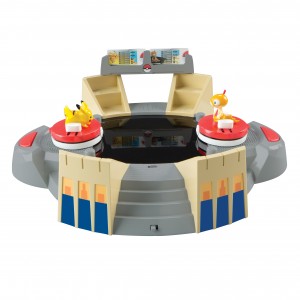 The newest games in the series for the Nintendo 3DS, Pokemon X & Y, are proving just as popular as their forebears and longtime toy maker TOMY has a whole new toy line in stores for fans to catch. Hitting stores right now is stuff like the Battle Arena, some Poke balls and of course- plushies of some of the pocket monsters themselves. Probably the coolest thing on the list for fans though is that talking Pikachu who, with motion activation and 9 different phrases, sounds like an awesome addition to the old game shelf.

Tomy makes some cool stuff in general. I have a huge soft-spot for the company going way back into the ’80s and their awesome Zoids line, which I ate up with a spoon. I think they used to eat up my G.I. Joes pretty regularly too now that I think about it…

Anyway, here’s the official lineup as far as Pokemon is concerned. Get your wallets warmed up:

There are no firm release dates for the new stuff, but TOMY tells us that most of it should either be on shelves now at your local toy shop (which is probably Toys R Us) or on the way soon. All of it should be available for the Holiday Season though, so feel free to go forth and catch ’em all.

Jason's been knee deep in videogames since he was but a lad. Cutting his teeth on the pixely glory that was the Atari 2600, he's been hack'n'slashing and shoot'em'uping ever since. Mainly an FPS and action guy, Jason enjoys the occasional well crafted title from every genre.
@jason_tas
Previous Avengers Arena #18 (Comics) Preview
Next Xbox One buggy? Microsoft says not to worry