Artist Clayton Henry has signed on with the publisher for an exclusive run with Valiant’s Harbinger series starting in January’s issue #20 and the daw of the Resistance story arch. 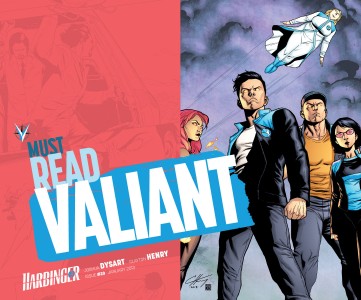 He’s also teaming with fellow Valiant-exclusive talent and Harbinger Wars partner Josh Dysart for the Harbinger ongoing’s next big arc- and this is a very big arc. The Resistance storyline is meant to be a fresh jump on point for readers looking to get into one of Valiant’s best series.

Peter Stanchek and his team of teenage superhuman outlaws have decided that the best defense is a strong offense. Pursued from coast-to-coast by their would-be overlord in the Harbinger Foundation, the Renegades are about to launch a strategic strike on Harada’s secret empire – and they’ll start by revealing to the world just what kind of power they’ve been hiding all along. The ace up their sleeve? A seemingly normal teenage hacker named Ax…who knows exactly what Harada has been up to since day one…

Harbinger #20, aside from being a new plotline and jump on point, is also a part of the Valiant Must Read campaign. What’s that mean? Basically it’s a marquee issue with a clean arc that fans both new and current can dig into, or as Dysart summed it up:

So far Must Read Valiant includes Quantum and Woody #5, Shadowman #13, Bloodshot and H.A.R.D. Corps #18 and , of course, Harbinger #20. If you haven’t been following Valiant’s rise from the ashes towards being one of the best publishers in comics today, these are the issues to get.

Jason's been knee deep in videogames since he was but a lad. Cutting his teeth on the pixely glory that was the Atari 2600, he's been hack'n'slashing and shoot'em'uping ever since. Mainly an FPS and action guy, Jason enjoys the occasional well crafted title from every genre.
@jason_tas
Previous More Dixie Kong action in Donkey Kong Country Tropical Freeze trailer
Next MadCatz to have Titanfall line on shelves soon