On sale right now from the toy and collectable maker (among other things) is a Minimate of the classic Marvel Comics big-bad Onslaught, and he’s brought a bunch of brand new Marvel pals along with him. 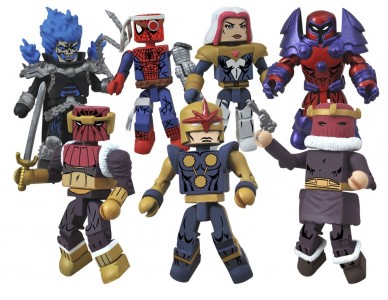 If you remember the contest that DST held a while back, then you might remember fans (like you) got to pick a selection of Marvel characters to make up the upcoming 50th set of Minimates based on the publisher’s characters. This is that set- and it looks fantastic. Not only do we get fan-favorites like Songbird, a Nova-corpsman, both Baron Zemos and blue-flam Ghosty, but we also get (for the first time ever) Minimates of the ‘cyborg’ Spider-Man and Onslaught – straight from the ’90s Spidey and X-Men/Marvel U epics that they starred in.

With iconic versions of characters (pay attention Marvel and DC), over-the-top story lines and breakout artists, the 1990’s were easily one of my personal favorite era’s of comics. The fact that we actually get Onslaught is cool enough, but Cyborg Spidey? Yes, please. Now I’m more than a little biased towards these characters, but even if you’re not, these are some cool mini-figures and there’s more than likely somebody in this lineup that you want to add to your shelf.

If, by some quirk of fate though, you don’t like Minimates (really?), there’s still some awesome stuff out there this week from DST. Here’s your rundown of what’s in stores today:

Jason's been knee deep in videogames since he was but a lad. Cutting his teeth on the pixely glory that was the Atari 2600, he's been hack'n'slashing and shoot'em'uping ever since. Mainly an FPS and action guy, Jason enjoys the occasional well crafted title from every genre.
@jason_tas
Previous Thor: God of Thunder #14 (comics) Preview
Next Ubisoft’s European exclusive Deadsec edition of Watch_Dogs gets unboxed