Let’s start with one observation – Blacklist is a game of many parts. There are several multiplayer modes, there are co-operative missions, and there is the main focus – the single player campaign; in turn, this is encouraged to be played several times over in several ways.

There was a mention of the basic plot foundation in the original single player preview, and is probably enough grounding to avoid giving spoilers for the game. However, what I will expand on is the scoring. As described earlier, the game records subtle and non-lethal play as Ghost style, discrete but lethal as Panther, and the desire to run screaming down corridors with grenades exploding and guns blazing as Assault. An average level will often have a mix of these totalled up at the end for a final score, although there are points targets for each which are considered to have “mastered” that style. These usually require a specific play through the level to reach, and emphasise something – the playing styles really are different.

This is even more impressive when weighed against one of the game’s bigger faults – its linearity. The path through the game and the set-pieces encountered do not differ. There are alternate paths of course – a little exploration may find a way of avoiding fights that a Ghost appreciates, even if someone seeking Assault points would find the path of most resistance ideal. But there is no wider sense of exploration – you will follow the same corridors, explore the same rooms, and climb the same structures.

However, as a fault it is also a blessing, because it also means the areas have had that extra attention – where you approach from and head to, how to get through enemies on route – and become playgrounds for you and your equipment.

Most of this gear is unlocked through purchases – completing missions tends to pay a lump sum, although there are little bonuses to be acquired on route as well, and this can be spent on either all new items or upgrading existing ones. There are special cases though – some pieces of kit are actually unlocked on completing all of chains of side missions; a few are tied to the UPlay website to be bought with credits gained from completing in-game tasks; one is unlocked via the game’s tie-in iOS/Android app, Spider-bot; and a selection of guns are unlocked via a single DLC pack (240 Microsoft points). 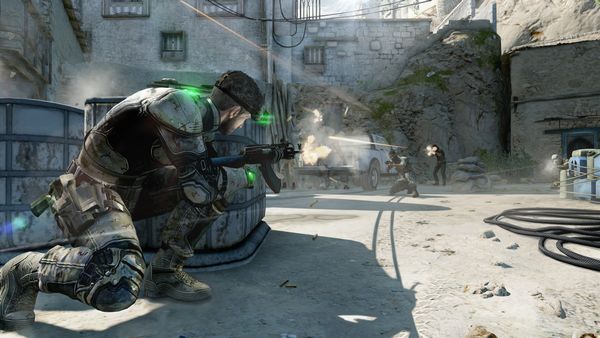 This is similar for the PvP gear unlocks – the money gained in single and multiplayer feeds a common pool. However, most multiplayer item unlocks also need a single token each too – which are only gained by levelling your multiplayer rank up. As such, you cannot simply “buy” a well geared spy or merc from the earliest opportunity, but do need to work towards a little levelling up (although this – in the early stages at least – is quite a fast process).

A lot was said of the multiplayer Spies vs Mercs in the preview tournament a few weeks ago; this still covers most of it, although there are other game modes added now, including a team deathmatch. However, the way the lobbies work does need commenting on. When you join a lobby, you are dropped into running games – but this also means that if there are not enough players around you will be running around waiting… perhaps a small point, but when you find yourself running alone for the first two minutes of a ten minute round, a notable one. 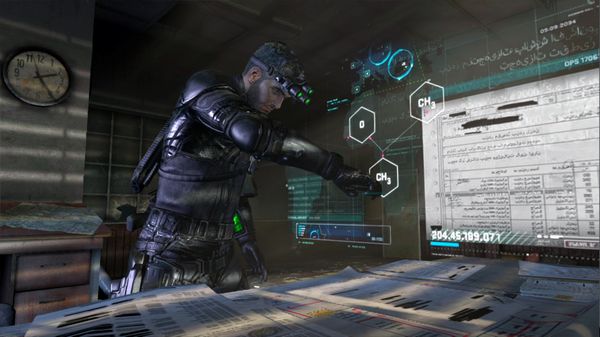 If unlocking gear or looking to beat higher difficulties are not enough of a draw, for completionists there are also several challenges. These range from straightforward number-crunching, such as to kill a certain number of enemies with specific guns or equipment, and run up to specific tests such as knocking out three enemies with sleeping gas or achieving kill-streaks without breaking stealth. The reward for completing these is yet more money – which at some point is likely to lose any sense of value.

There is a sense of quantity as well as quality to Splinter Cell: Blacklist. While the route though the game is essentially linear, the different play modes mean there is no ideal way to take it. Levels are obviously designed to be replayed several times over to be considered “complete”, although it’s hard to see what may draw you back as much after this. The multiplayer is as satisfying as the preview suggested, and has further game modes to explore. On the other hand, the lobbies sometimes creating near-empty games feels like something that needs to be tweaked – competitive multiplayer is a strange thing to explore solo.

Zeth is our EU Senior Editor and has been writing about video games since he joined BG back in 2008. He's pretty old and has been a gamer since he played Space Invaders as a young boy in the 80's. His genre tastes lean towards platformers, point-and-click adventure, action-adventure and shooters but he'll turn his hand to anything.
Previous Harbinger’s Perfect Day ends with Friedman variant cover
Next Ninja Cats vs Samurai Dogs coming to mobiles