Capcom released another look at their upcoming remake of the NES classic Ducktales today with a smattering of screens and a tad of new info. 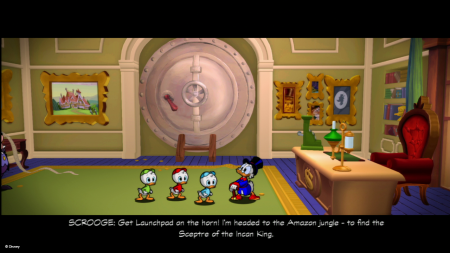 When Scrooge McDuck heads back to consoles this Summer in Ducktales Remastered, he’ll be bringing a few new elements with him. Don’t worry though, this is the kind of stuff that won’t really affect gameplay at all as developer Wayforward will be keeping that beautifully old school.

Among the new additions is a tutorial level (which I can’t imagine anyone really needs), a museum where you can track Achievements and general progress, and (the best of all) a Money Bin level. What’s the use of a Money Bin level, you ask? Simple- you can swim around in Scrooge’s cash and play with all the coins that you’ll be picking up as the game progresses.

If you’re not a fan of the original cartoon, you might not realize why that’s such a big sea- but trust me it is. Racecars, lasers, aero-planes… Ducktales Remastered arrives on the Wii U, Xbox 360, PS3 and PC this Summer.

Jason's been knee deep in videogames since he was but a lad. Cutting his teeth on the pixely glory that was the Atari 2600, he's been hack'n'slashing and shoot'em'uping ever since. Mainly an FPS and action guy, Jason enjoys the occasional well crafted title from every genre.
@jason_tas
Previous Diablo III dated for PS3 and Xbox 360
Next Focus Home teases Blood Bowl II