I had no idea what to expect when I started playing Mars: War Logs. Based on simply the name alone, I was anticipating some sort of turn-based, science-fiction, strategy war game, but what I got was quite a bit less boring sounding (sorry, strategy war game genre)!

While I felt that I was getting into a slower-paced science-fiction game, Mars: War Logs is actually a relatively decently-paced ride that I enjoyed, despite some of the game’s shortcomings. To describe Mars: War Logs’ gameplay style in the simplest way, I would compare it to BioWare franchises Mass Effect and Dragon Age. It’s an action-RPG game with a mix of cinematic flare to help tell a story that players feel committed to, and involved in.

Like typical, modern Western action-RPGs, Mars: War Logs offers familiar expectations: action-oriented combat, leveling-up with skill trees, side quests, some light-crafting, and player choice and a morality system. There are some elements that feel like they work really well, like combat. Other features, like crafting and open-exploration, didn’t feell quite as flushed out compared to other popular action-RPGs. 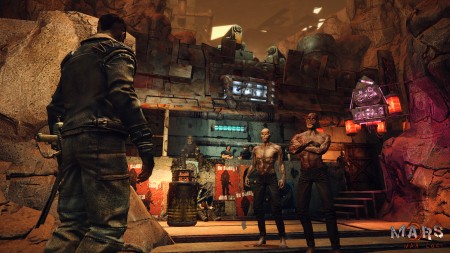 One thing that also felt that could have used some more work were the names of characters in the game. In the world of Mars: War Logs, several characters are named after virtues, like Morality and the main character/narrator Innocence. I felt that it was silly and contrived when I first started playing it, and I never changed my mind. In a way, it made me roll my eyes in the same way I do when I play Japanese RPGs where I’m supposed to believe that a sheltered and naive 15-year-old child will fatefully become a heroic savior, not only besting the world’s toughest enemies but by also destroying an ancient, empire/world-crushing evil force, just he and his band of friends.

Graphically, the Mars: War Logs is a better-than-average looking game. I played the game on a mid-level 3+ year-old Dell laptop that was running a 64-bit version of Windows 8 Pro, with an average video card where the latest drivers that were at about 2 years old. I toned down the visual fidelity a bit, and the experience was pretty smooth without having to resort to bland low-res textures or choppy frame rates. As you can tell from the screenshots, it’s a pretty nice looking game. I was pleased with the performance and expect that it should run fairly well on slightly older PCs, can speculate that it’ll run smoother, with a higher-resolution textures on a beefier modern PC. 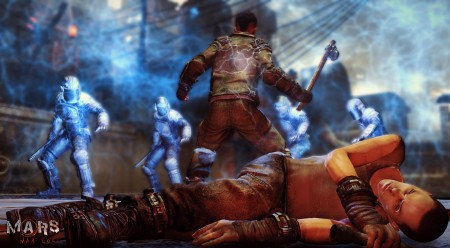 While I compared Mars: War Logs to BioWare’s Mass Effect and Dragon Age series, it didn’t feel as polished. Then again, we’re comparing apples to oranges in a way, as Mars: War Logs is developed by a smaller developer, Spiders Studios, and published by Focus Home Interactive, and not Electronic Arts. Take that criticism with a grain of salt. For a budget-friendly title that doesn’t require a state-of-the-art PC to run, I think that it’s a pretty good deal, overall.

Mars: War Logs is only available on the PC (Windows XP to Windows 8) via the Steam service, and at the time of this review, is currently available for $20.

Mars: War Logs, despite some of its quirks and shortcomings is a decent sci-fi, action-RPG. While I think a simpler name would make it sound a little more exciting (I originally thought I was walking into a turn-based strategy game based simply on the title), it overall looks and plays like a game along the lines of Mass Effect and Dragon Age.

It ran decently on an older PC with an average video card, and is available through Steam for only $20. Mars: War Logs is developed by a smaller studio, and while I compared it to a series like Mass Effect, don’t expect the same level of polish that big names like BioWare and EA can afford to put into their games. (To be fair, the quality of some of the latest offerings from BioWare and EA are a bit questionable.)

Overall, I liked Mars: War Logs, but based on some user and other Metacritic scores, my score of 7 (out of 10) is on the higher end. So, you’re mileage may obviously vary. For a relatively new game, released just a little over a month ago for $20, I think it’s a good deal.

Troy is the Features Editor at Brutal Gamer. When he's not writing about or playing video games, he's enjoying life with his wife and children. He also loves coffee. And lots of it.
Previous New Assassin’s Creed IV books announced
Next Harmonix and Disney announce Fantasia: Music Evolved