Marvel heads to C2E2 in a big way

The comics giant has a full schedule of events and happenings for Chicago fans this coming weekend.

Marvel Comics will be displaying at booth #1119 on the show floor and is planning quite the show with giveaways, signings and that costume contest that everybody has come to expect. On top of that, there’ll also be a pile of signings available all show long, so make sure you bring that footlocker full of back issues that’s been sitting in the basement.

Actually… maybe don’t bring it. Nobody’s going to be able to sign all that and, honestly, the musty smell might clear out the convention center.

So who’s who and where will they be? Check these schedules out: 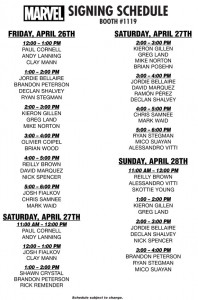 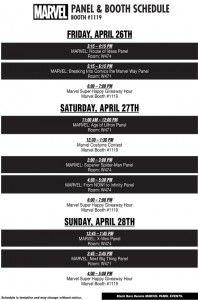 Now, if for some reason you can’t make it to the show, Marvel has you covered there too. The Marvel Comics Event App (or on the web at events.marvel.com) will be stocked with videos, announcements and more all show long. You’ll also be able to keep track of signings and panels from the App if you are at the con. Technology!

Jason's been knee deep in videogames since he was but a lad. Cutting his teeth on the pixely glory that was the Atari 2600, he's been hack'n'slashing and shoot'em'uping ever since. Mainly an FPS and action guy, Jason enjoys the occasional well crafted title from every genre.
@jason_tas
Previous Combo Crew kicks it on mobiles
Next The Elder Scrolls V: Skyrim gets Legendary