Judgement squeezes more life out of the Xbox 360 says Epic 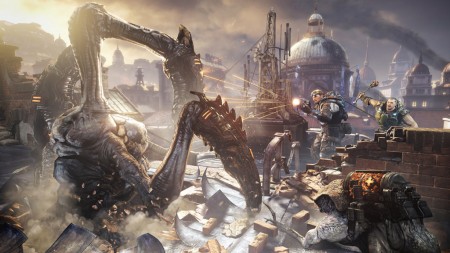 Level designer Jim Brown and art director Waylon Brinck recently told OXM magazine that they both think the Xbox 360 still has more in the tank and hasn’t been maxed out as of yet in terms of developers taking advantage of the console’s hardware.

“Right off the bat there were two pillars of the game that we had to support by optimising like crazy,” Brinck said of Judgment. “We wanted this to be the most intense game ever. More enemies on screen, more action, more dense action, less of that sort of downtime in between. We had to get those enemies in there, we had to stream them fast.”

It seems like there’s always a little more that a talented development team can eek out of a console, even in its last year of real relevance. The pair went on to say that the prequel story of Gears of War Judgement required a whole reworking of how they designed a Gears title.

“Then also, the other Gears games were post apocalyptic. It was all about the destroyed beauty. In this game, it is the apocalypse. The beauty is being destroyed.” added Brinck. That’s an interesting thought and one that just goes to show how different Judgement will be form previous entries in the Gears series.

Check out the article in its entirety here on OXM. If you’re a Gears of War fan, it’s more than worth checking out to get some insight into the thought that went into Baird’s first starring role.

Jason's been knee deep in videogames since he was but a lad. Cutting his teeth on the pixely glory that was the Atari 2600, he's been hack'n'slashing and shoot'em'uping ever since. Mainly an FPS and action guy, Jason enjoys the occasional well crafted title from every genre.
@jason_tas
Previous Injustice Battle Arena enters quarterfinal round with some heavy hitters
Next Rochard: Hard Times (PC) Review