Morning Campers! (Yes, I mean that literally). To kick off this New Year the first DLC drop for BLOPS 2 has been outed. 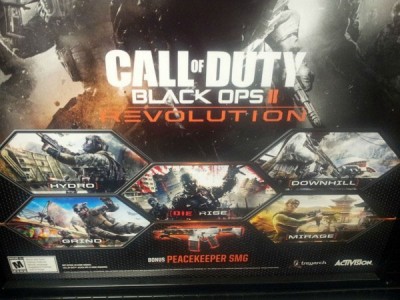 The DLC is to be titled ‘Revolution’ and will contain five new maps – the four MP maps and one new Zombies map. The four MP maps are: Hydro, Grind, Downhill and Mirage and the Zombies Map is titled Die Rise. Not only do you get these maps, but you also get a brand new weapon, the Peacekeeper SMG.

Another promotional image has been leaked with the date 29 January and “first on Xbox360”…Which is the usual trend for Call of Duty DLC.