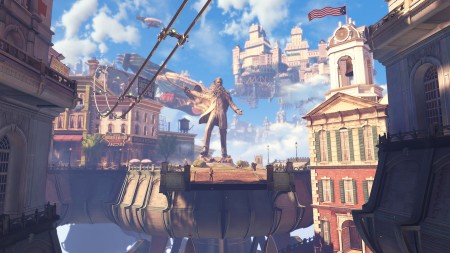 Infinite is a pretty big game. The title introduces a new setting, characters and more to the universe created by Irrational Games and is a pretty radical departure from the the undersea setting that the first two games in the series had.

Originally, the game was set to drift onto retail shelves (for the Xbox 360, PS3, and PC) at the end of February, but studio head Ken Levine has officially announced the need for a little more development time on the game to polish things up a bit. So with that in mind, fans won’t be seeing Bioshock Infinite at retail (or online) till March 26th, 2013.

Website Polygon broke the story this morning and pointed something interesting out about the new date too- while February (original date) is stacked with new releases (some of them pretty massive in the forms of Metal Gear Rising and Dead Space 3) , March (new date) has almost nothing of note. Except for Bioshock Infinite and Army of Two: The Devil’s Cartel, and in my estimation AoT isn’t really much competition for something like Bioshock.

Jason's been knee deep in videogames since he was but a lad. Cutting his teeth on the pixely glory that was the Atari 2600, he's been hack'n'slashing and shoot'em'uping ever since. Mainly an FPS and action guy, Jason enjoys the occasional well crafted title from every genre.
@jason_tas
Previous Tiger Woods PGA Tour 14: Masters Historic cover unveiled
Next Preview: X-O MANOWAR #11