The MAG II locks and loads for Black Ops 2

Scheduled for launch right alongside one of the biggest shooters of the year, the MAG II FPS controller from All Interactive Entertainment brings the war to your PS3 or PC. 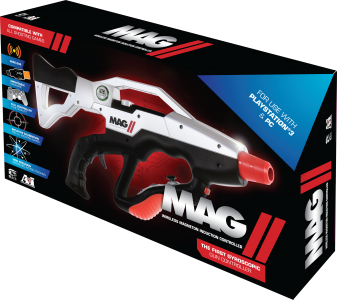 Normally I’m not much for gimmicky controllers, but I am a pretty big sucker for ‘gun’ peripherals. I remember being brutally disappointed by a silver pistol I bought for the PC way back in the Doom era as it basically didn’t do anything other than provide movement keys and a ‘fire’ button. Not that it was expensive mind you, it’s just that I had such high hopes. Tragic really…

The new MAG II rifle from All Interactive Entertainment, despite its looks, is not a light gun- but it’s also not a one trick pony like that piece of junk I bought back in the ’90s either. What’s particularly nifty about the MAG II is that it has a full controller layout built in, plus a gyroscope and motion sensor. 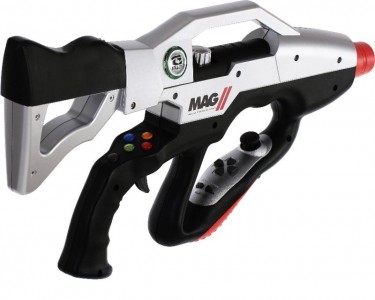 So basically, it goes one step beyond being a standard controller shaped like a gun and almost gets into PS Move territory in it’s functionality. You can also download new functions and gameplay modes via PC link down the road that will expand the capabilities of the MAG, which is always nice.

– Compatible with ALL First-Person-Shooter games

– Real Time, in Game, “On the Fly Calibration”

– Works with ALL TVs, Projectors & Monitors

Pretty cool stuff all in all. The MAG II is available now for pre-order from GameStop and Amazon and is scheduled to drop just in time for the launch of Call of Duty: Black Ops 2 and is compatible with both PC and PS3.

Jason's been knee deep in videogames since he was but a lad. Cutting his teeth on the pixely glory that was the Atari 2600, he's been hack'n'slashing and shoot'em'uping ever since. Mainly an FPS and action guy, Jason enjoys the occasional well crafted title from every genre.
@jason_tas
Previous Doctor Solar Man of the Atom vol.2 (comics) Review
Next X-O MANOLUGE- Valiant Comics to sponsor US luge team