Behold the power of the P-Acorn! 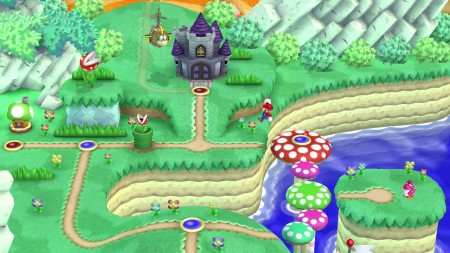 In the first volley of games for the Nintendo Wii U, Mario decidedly stands out. Isn’t that the norm though? Even now in the days when there seems to be a Mario title (or a few) out every year, it’s still something of an event to see the brotherly plumbers tackle King Koopa- or as you probably know him, Bowser.

The Wii U launch will be no different as the sole title that I’m looking forward to over all the rest is New Super Mario Bros U. The title is set to offer everything you’d expect from an old school (2D) Mario game and then some.

Here’s a look at what’s new (and some of what’s back) in NSMBU, straight from Nintendo:

P-Acorn? Yep, you read it right.

Look for New Super Mario Bros U to scamper onto retail shelves right alongside the Wii U console when it drops on November 18th.

Jason's been knee deep in videogames since he was but a lad. Cutting his teeth on the pixely glory that was the Atari 2600, he's been hack'n'slashing and shoot'em'uping ever since. Mainly an FPS and action guy, Jason enjoys the occasional well crafted title from every genre.
@jason_tas
Previous Dead Island Riptide gets official
Next EA proclaims Need for Speed Most Wanted ‘most social’