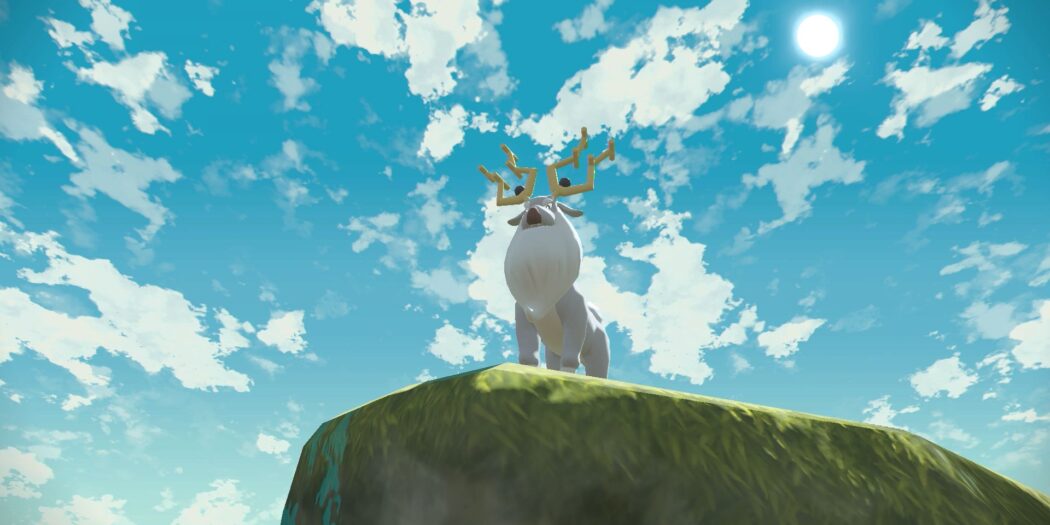 A couple of years ago, I mentioned the positives and the negatives of Pokemon Sword and Shield with an in-depth look at where the latest franchise entry ultimately succeeded…and stumbled.

Pokemon Legends: Arceus stumbles in some of the same ways—poor story-telling decisions chief among them—but avoids most of the others thanks to its nature as a spinoff. But that’s not to suggest it doesn’t create its own troubles. As is the new nature of Pokemon games, for each brilliant addition and captivating gameplay element, another dilemma appears from the tall grass.

After getting Isekai’d into ancient Hisui (Sinnoh), the player is introduced to a world where people fear Pokemon and a giant wormhole has opened up in the sky. Solving both of these problems requires completing the region’s first Pokedex, a notebook of data you collect and maintain for Professor Laventon and the Galaxy Team.

*Also, your phone is Arceus (think Rotom-Dex from Sun and Moon, except it doesn’t talk much).

Putting aside the design of the Pokemon Professor, which is absolutely the worst, players who’ve been around the Pokemon block will recognize the symbol and nomenclature of Hisui’s primary seat of power. Galaxy Team bears the roots for what will one day become Team Galaxy, nefarious ne’er-do-wells of the Sinnoh Region. But in this game, at least, they maintain the village for all the people struggling to survive in this new world of Pokemon.

So far, so good (excepting Laventon and perhaps your patience for Isekai plots). Out the player goes to prove that Pokemon aren’t all bad and figure out what the deal is with the wormhole. As usual, the player selects one of three Pokemon to accompany them before setting foot into the wide-open spaces of Pokemon Legend: Arceus’s distinct areas.

Other than the Isekai elements, everything is pretty basic Pokemon up until this point, but it’s here that this new rendition changes everything.

Action gameplay allows the player to chuck their Pokeballs at unsuspecting Pokemon. Stealth, dodge-rolls, and accurate aiming all come together to make for an entertaining new way to catch them all. Seeing the Pokemon bounce around the wide-open world is something of a delight. Some attack, some flee, and others still roll up to you curiously. Learning the way each one moves can be helpful in catching them, rewarding patient players.

And you’ll want to make it as easy as possible if you’re looking for ‘Dex completion. Instead of just adding each one to your PC, Pokemon Legends: Arceus asks you to collect “data” on each Pokemon. That means achieving several mission parameters for each individual species. For example, you’ll need to catch a specific number of Heavy Bidoofs. Each Pokemon has several tracks to complete, such as Defeat 10, Feed it 5 times, or catch 25 of them. Complete a mission to earn a stamp; collect ten stamps to “complete” a Pokedex entry, and finish the rest of them to master it.

Data is necessary to increase your Galaxy Team ranking, which is necessary to progress in the story. My completionism saw me tackling everything as I went so that my progress was never gated, but it may bother those hoping to rush it.

Though let’s be honest: if you’re not playing Pokemon Legends: Arceus for its gameplay loop, then why would you play it at all?

Certainly not for the story. The bulk of its issues come later, when the plot actually comes to a head. Before that, it’s just “Pokemon A is running rampant! Please help!”

Not-so-subtle hints are dropped frequently that the leader of Galaxy Team and the merchant Volo are the big bads to such an extent that even the other characters begin to question it. But not the player character. You are an unthinking errand boy until it’s too late.

Ultimately, you get kicked out of town because of no discernably sensible reason, which is fine when you think the big bad is doing a power play and pushing his weight around, but not fine when he barely puts up a fight. Not to mention every single character is like, “Well, orders are orders, good luck, even though you and your Pokemon literally built this village.” Did no one stop to consider the fact that the player has hundreds of Pokemon, supplied every Pokemon inside the village, built the economy, streamlined agriculture, and did personal favors for every individual…bad buys included?

Getting dumped like that was dumb, but being reinstated to the team that I was never invested in in the first place was even more disappointing.

Worst yet is that the Galaxy Team leader, big-bad commander maintains his authority despite nearly dooming the Hisui region and known universe on a whim.

Fancy-form legendaries were dope as shit, though.

In so many words: the story of Pokemon Legends: Arceus falls apart due to being too much a fan of its own antagonists, and not enough a fan of sensible writing.

Even including the story, the biggest disappointment is the changes to the battle system. Inconsistent turn order and obtuse speed mechanics needlessly complicate once accessible game mechanics while simultaneously rendering slower wall-breakers nearly obsolete. Altered damage maths cause level 2 Pokemon to survive hits from your level 30 Pokemon and your level 50 carries to take significant damage from level 20s in ways completely alien to the mainline games.

Combining the two makes it harder to predict and harder to control the battles.

Traditional Pokemon battles are relatively few, which is honestly a relief. Many of them put you in 1v2/3/5 situations without the moves to handle them. On occasion, a trainer will bring out their next Pokemon and attack as many as four times before you can respond.

Apex Pokemon add some challenge and excitement to the exploration, but ultimately boil down to the same strategy: sacrifice your Pokemon one by one until the ball works. (That’s if you were spotted).

Many other moves and mechanics have been changed, and there are no abilities to speak of at all. In the end, I found none of the disruptions to be an improvement when it comes to traditional Pokemon battles in Pokemon Arceus: Legends, except for being able to walk around the battle as it happens.

The pre-battle-catching mechanics, on the other hand, are incredibly fun. That’s the sneaking, bait-chucking, positioning, dodge-rolling, and ball-tossing that are all very new. The new Hisuiuan forms are great, too. It’s just too bad almost all of them were either announced before the game came out or mentioned before you actually have a chance to see them for yourself.

Finally, drab colors, dull water, and ugly textures make the simple geometry hard to look at. Even just brightening it up a bit would have done wonders for making the world feel a little more alive, and look a little more inviting.

The basis of Pokemon Legends: Arceus, the open-area exploration, the action-catching mechanics, and the historical setting are all engaging, exciting spins on the mainline formula that kept me engaged for the 70+ hours it took to overcome the story, catch ‘em all, complete each Pokedex entry, and achieve the highest rank. But man, the poorly-executed plot, head-scratching traditional battle changes, and muddy environments seriously detract from this experiment.

That said, I’ll still be there on the day and date of release for the next Pokemon game. That’s just the sucker that I am—and the ultimate ruling on just how fun these games are.

Brutal Gamer's Nintendo Editor began his gaming life a little late- at five years old. But he's made up for it in the two decades since, gaming and writing about gaming with the same passion, fervor, and unrelenting love as his five-year old self.
Previous Pull back the curtain on Warhammer 40K: Space Marine 2’s development
Next Warhammer 40K: Inquisitor – Martyr bringing a new class to new-gen