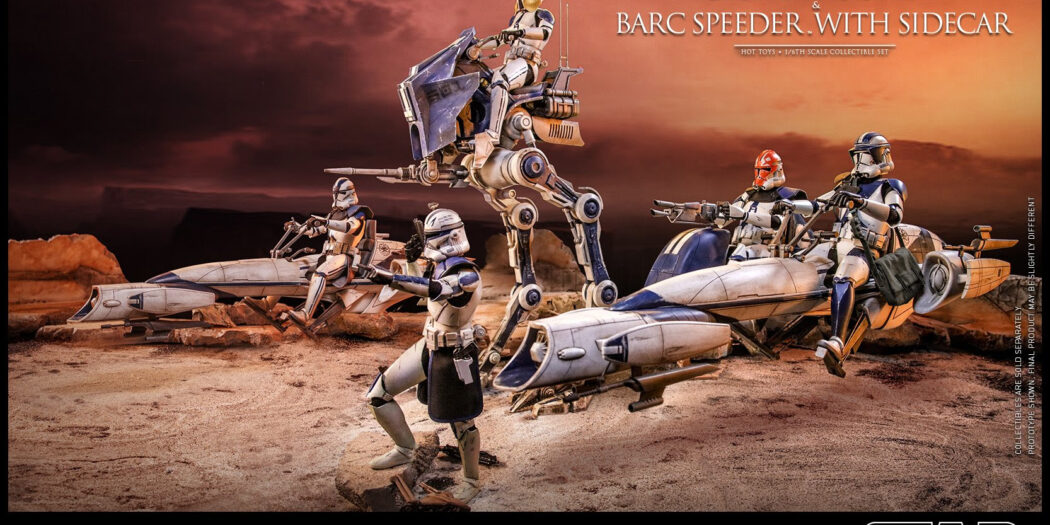 Not one, but two new Star Wars vehicle sets coming from Hot Toys

Hope you have some shelf space available, because Hot Toys has a pair of Star Wars: Clone Wars BARC Speeder sets hitting pre-order.

Hot Toys’ Star Wars prequel collection is about to be a heck of a lot bigger. The company is moving into the vehicle space, and has two BARC Speeders just now hitting pre-order. It should go without saying too, that both are pretty impressive.

Both sets are in the 1/6th scale of course, and both also have a high level of articulation, sculpt, and paint deco. But while the overall quality is similar, and the same Star Wars ‘prequel era’ vehicle is the backbone of both, these sets are actually fairly different.

The first is a solo speeder, that comes packed with Commander Appo. A Clone Trooper Commander, Appo was in the 501st, Anakin Skywalker’s legion. And when his General fell, so did he, though he did so to Order 66 and not specifically the Dark Side.

As for the second, that’s a little more troop-buildery. Well, that’s to say you could use it to troop build, if you had that kind of green (these ain’t cheap, you know).

Set #2 includes a speeder that has a sidecar attached, and a Heavy Weapons Clone Trooper for a pilot. While you don’t have to man the sidecar, or even attach it, it can fit another (not included) Trooper.

Both sets are scheduled to ship some time in the middle of 2023, and are up for pre-order right now. Full details below.

An expertly detailed figure inspired by the appearance of Commander Appo, also known as CC-1119™. Appo was a commander in the 501st Legion™ during the Clone Wars™, who went on to participate in the Siege of the Jedi Temple™ alongside Anakin Skywalker™ toward the end of the war.

This highly articulated figure features newly crafted armor and a helmet, a skillfully tailored outfit, a variety of interchangeable hands, a blaster rifle, and more!

The Commander Appo with a BARC Speeder Collectible Set is available for pre-order now, via Sideshow.com.

The 1/6 scale BARC speeder is intricately detailed and expertly designed to incorporate articulated foot pedals, handle grip, steering vanes, engine flaps, and a cannon, all expertly painted with weathered effects. This version of the BARC speeder also includes an attachable sidecar armed with an articulated blaster.

The Heavy Weapons Clone Trooper and BARC Speeder with Sidecar Collectible Set is available for pre-order now, via Sideshow.com.

Jason's been knee deep in videogames since he was but a lad. Cutting his teeth on the pixely glory that was the Atari 2600, he's been hack'n'slashing and shoot'em'uping ever since. Mainly an FPS and action guy, Jason enjoys the occasional well crafted title from every genre.
@jason_tas
Previous Trailer: Classic RTS play returns to the PC with Crossfire: Legion
Next Video: Activision debuts gigantic Modern Warfare II art