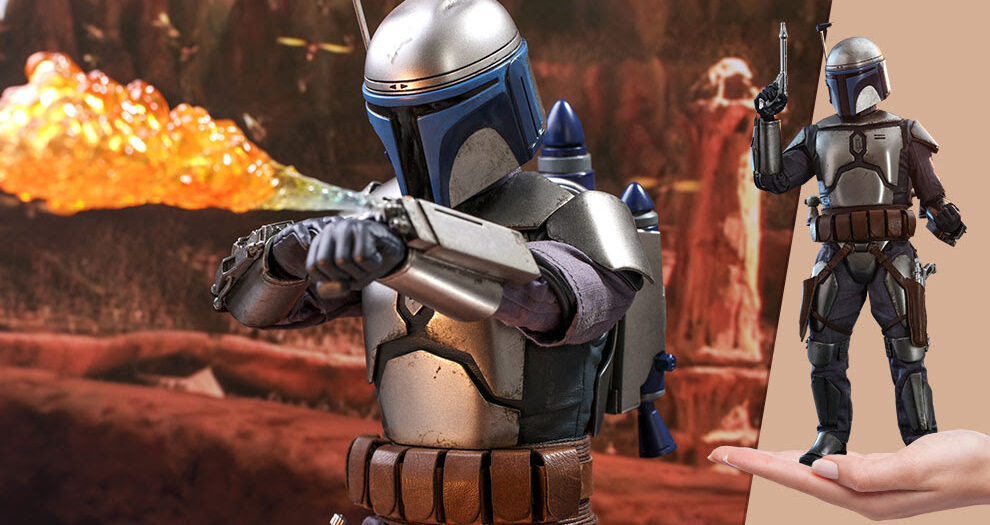 Hot Toys’ newest Jango Fett figure is looking great and shipping very soon. Sideshow Toys has a fresh look at it with a full unboxing.

One thing neither Fett has been, is simple. That goes for both father and son. The name carries more weight now too, than it maybe ever has, with the new The Book of Boba Fett TV show on Disney+.

But before Boba took over the Hutt crime operation on Tatooine, his dad Jango was the most feared bounty hunter in the galaxy. And it’s he that this new Hot Toys figure is based on.

Jango is depicted in his gleaming silver Mandalorian armor, and cast in Hot Toys’ usual 12″ scale. Of course, he also includes appropriate accessories, and has plenty of articulation and detail.

Check him out in Sideshow’s latest unboxing:

The second installment of the prequel trilogy turns 20 this year! What better way to celebrate Star Wars Episode II: Attack of the Clones™ than by honoring the man who is regarded by many as the best bounty hunter in the galaxy — the clone template himself, Jango Fett™!

This new Star Wars™ figure draws inspiration from the appearance of Jango Fett in Episode II: Attack of the Clones. It features a newly developed, hand-painted head sculpt with striking likeness and screen-accurate facial scars, a meticulously crafted Mandalorian™ helmet and armor with beautifully applied weathering effects, a finely tailored undersuit, a poncho, the bounty hunter’s iconic jetpack, and a wide assortment of accessories.

Jango is shipping some time from this month through July, and is priced in at $285 USD. Pre-orders are still open however, and you can secure one for yourself here.

Jason's been knee deep in videogames since he was but a lad. Cutting his teeth on the pixely glory that was the Atari 2600, he's been hack'n'slashing and shoot'em'uping ever since. Mainly an FPS and action guy, Jason enjoys the occasional well crafted title from every genre.
@jason_tas
Previous Trailer: The PC gets Oddworld: Soulstorm Enhanced Edition next month
Next Sonic the Hedgehog 2 hits digital today, physical this August