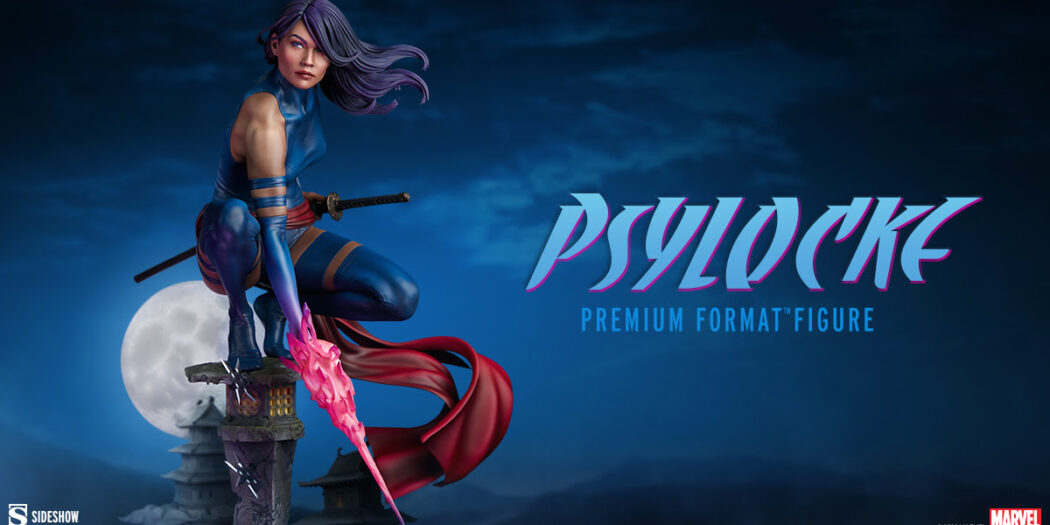 Marvel fans take note of this one. There’s a Premium Format Figure of one of the X-Men’s most powerful psychics on the way. Check out Psylocke.

Right there with the most iconic X-Men, specifically of the 90s, is one Betsy Braddock. One of the greatest psychics to ever grace the super-team’s roster, Psylocke was as deadly with her ninja skills as her mental powers. Now this longtime X-Man is making her way into Sideshow’s Premium Format Figure collection.

Coming in at a massive 21″ tall and almost 14″ at the base, Psylocke is depicted crouched atop a “crumbling pagoda”. As you can see too, she’s decked out in her classic garb. As for weaponry, she wields both her physical sword and psychic knife. That’s a blade made up of her own psychic energy, for the uninitiated.

But as with most of Sideshow’s offerings, you have an added option with display as well. Psylocke is also packing a swappable right arm. That can reimagine her, as reaching for her katana, instead of igniting her psi-blade.

She gazes into the night, her focused and determined expression softly lit by both the cold glow of the full moon and the violet hue of the second (and even more powerful) blade in her arsenal — a shimmering knife composed of pure psi-energy.

Psylocke is priced in at $625 USD, and is set to ship out in mid-2023. She’s up for pre-order right now, via Sideshow’s online shop. Check that out here.

Jason's been knee deep in videogames since he was but a lad. Cutting his teeth on the pixely glory that was the Atari 2600, he's been hack'n'slashing and shoot'em'uping ever since. Mainly an FPS and action guy, Jason enjoys the occasional well crafted title from every genre.
@jason_tas
Previous The Amazing Fantasy banner returns to Marvel for Spider-Man Celebration
Next Trailer: Get an early look at Soulstice’s fast-paced, spectral combat