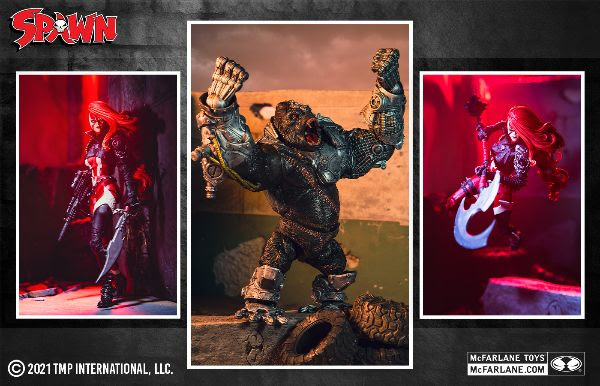 Remember those Spawn figures that hadn’t yet hit pre-order, when we told you about the newest wave? Well, they’re ready, and both are deluxe.

It was just recently, when we told you about the latest series of Spawn figures that was coming up from McFarlane Toys. The wave included Gunslinger, Soul Crusher, and the Dark Redeemer. At the time, even though they were in the promo image, Cy-Gor and She-Spawn weren’t really even talked about.

Well now here we are, and both figures have officially landed for your pre-purchasing pleasure. These are no ordinary offerings though, as both figures are in the deluxe category.

Cy-Gor is a monster. A beast of a figure and massive chunk of plastic that is in the Mega Figure line from McFarlane. Though he’s cast in the 7″ scale, you can see he’s not gonna be 7″ tall. But even though he’s your big boy, he’s still sporting that Ultra Articulation, with a full 22 POA.

As for Jess, she’s a Deluxe of a different sort. While Jessica Priest’s version of She-Spawn isn’t all that big, she’s seriously packing. She-Spawn comes complete with an arsenal that includes three different guns, an axe, a chain, and a Crocodile Dundee of a knife.

Both figures should add some serious oomph to your still early Spawn collection. And you won’t have to wait very long either, as Cy-Gor and She-Spawn are both set to ship just after the holidays, in January 2022.

The figures are available for pre-order from just about everywhere you buy action figures, and that includes McFarlane’s own online shop.

Jason's been knee deep in videogames since he was but a lad. Cutting his teeth on the pixely glory that was the Atari 2600, he's been hack'n'slashing and shoot'em'uping ever since. Mainly an FPS and action guy, Jason enjoys the occasional well crafted title from every genre.
@jason_tas
Previous Trailer: Marvel’s Guardians of the Galaxy hits consoles and PC
Next Trailer: From the Life is Strange team, comes Ashwalkers