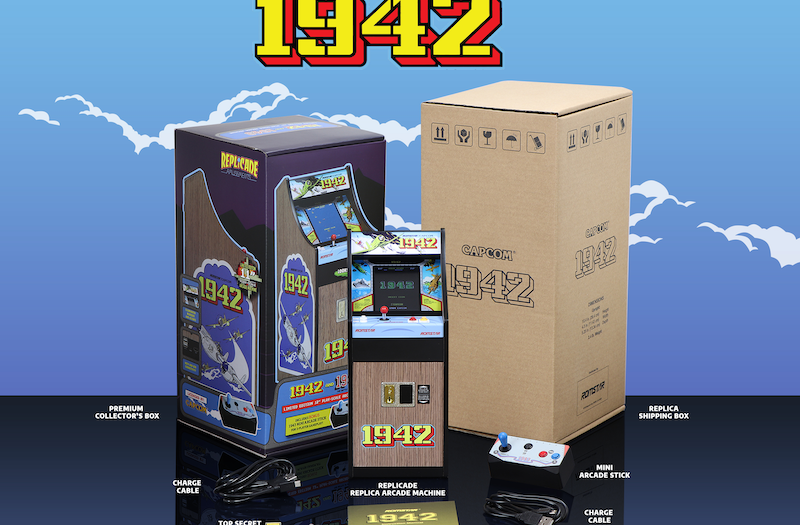 Mini-arcade cabinet maker New Wave Toys is ready with a brand new standup in its RepliCade line, with the classic Capcom “lowboy” 1942.

Home arcades are getting to be a real thing in video game fandom, but they take more than one form. While full size and 3/4 size arcade cabinets are popular, they’re not the most space-friendly of things. Enter the world of mini-cabs though, and you’re opening up the hobby to whole new section of gamers.

One of the biggest names in that, is New Wave Toys with its RepliCade series. The 1/6th scale RepliCade has so far seen the likes of Dragon’s Lair, Tempest, Street Fighter II Champion Edition, and others. And now it’s added one more with Capcom’s classic shooter, 1942.

Maybe the company’s most interesting cab yet in terms of pure visual impact, 1942 is a so-called lowboy. All you have to do is look at it to see why, since it’s literally low-profile as compared to other units.

Along with the actual form-factor, 1942 has the same level of authenticity as New Wave’s other offerings. Accurate graphics, a diecast coin slot, “customizable DIP-switch and cabinet settings” are all also included.

Want more? Sure. How about an included 2nd player controller and HDTV connectivity. Oh, and did I mention that you’ll need that 2nd controller for the included 1943: The Battle of Midway? Yep, it’s got that too.

Ready to start building your own mini-arcade? Click here to check it out. And while you’re there you can also take a peek at the full-on 1943 unit that’s coming up later this year.

Jason's been knee deep in videogames since he was but a lad. Cutting his teeth on the pixely glory that was the Atari 2600, he's been hack'n'slashing and shoot'em'uping ever since. Mainly an FPS and action guy, Jason enjoys the occasional well crafted title from every genre.
@jason_tas
Previous Trailer: RiMS Racing brings motorbike simulation to the Switch
Next Trailer: Irradiated RPG/shooter Chernobylite hits consoles