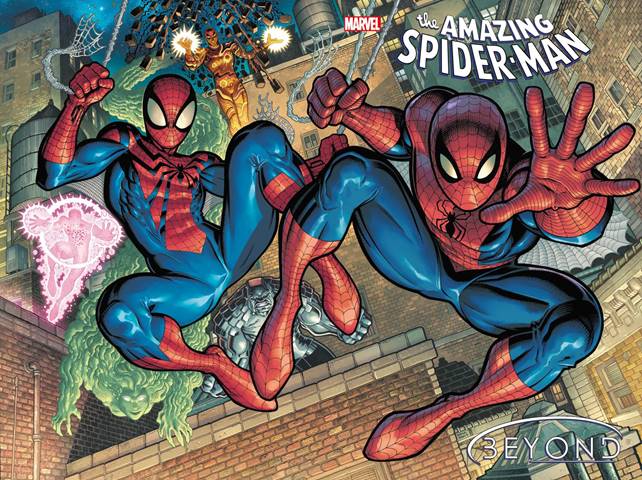 Spider-Man… Beyond? Kinda. The Beyond Corporation is the force behind Peter Parker’s clone, Ben Reilly. And he’s back to make a name for himself.

No, not another. If the press releases up to now are anything to go by, Ben’s version of the web-head will be the only Spider-Man in town wearing red and blue. Of course, that is to say, for now.

While the promo art shown here shows both Ben and Peter, it’s early going to be Ben’s show for the foreseeable future in the Spider-books. Exactly where Pete is going, we don’t know yet, although fellow Spider-Man Miles Morales doesn’t seem thrilled about the change.

In any event, Ben’s second run in the webs will be filled with new elements, as well as some classic foes and new twists on them. And it all kicks off with The Amazing Spider-Man #75, launching on October 6th.

An all-star lineup of writers and artists have assembled to bring you one of the boldest sagas in Spider-Man history! Kicking off next month in AMAZING SPIDER-MAN #75, creators Saladin Ahmed, Cody Ziglar, Patrick Gleason, Zeb Wells, Kelly Thompson will team up on the thrice-monthly title and shake up the Spider-Man status quo beyond your wildest expectations. This revolutionary era will see the return of Peter Parker’s fan-favorite clone: Ben Reilly. Backed by the Beyond Corporation, Ben Reilly is more than ready to take over and be the best Spider-Man there ever was. Does he have what it takes? And what does Peter have to say about it? This fresh take on the Spider-Man mythos will introduce new foes, redefine classic villains, and make you rethink the whole concept of Spider-Man! Get your first look at Ben Reilly’s early adventures as the new Spidey in the all-new AMAZING SPIDER-MAN BEYOND trailer, featuring never-before-seen artwork!

Jason's been knee deep in videogames since he was but a lad. Cutting his teeth on the pixely glory that was the Atari 2600, he's been hack'n'slashing and shoot'em'uping ever since. Mainly an FPS and action guy, Jason enjoys the occasional well crafted title from every genre.
@jason_tas
Previous Trailer: Back in theaters this month for anniversary 35 is Transformers: The Movie
Next Trailer: Celebrate 25 years of tomfoolery with Crash Bandicoot