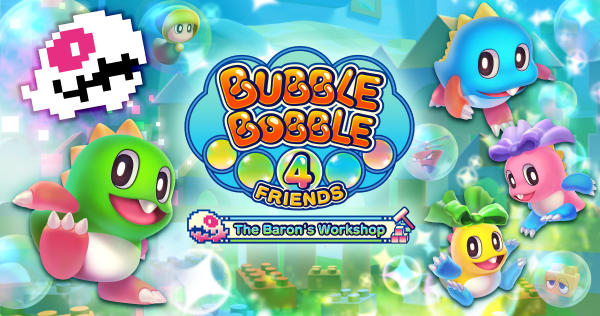 Formerly available for the PS4 and Nintendo Switch, Bubble Bobble 4 Friends is floating on over the PC for release later this summer.

The upcoming PC release of Bubble Bobble 4 Friends: The Baron’s Workshopwill feature all the original and downloadable content from the PlayStation®4 and Nintendo Switch™ releases, plus a new PC-exclusive Workshop mode where players can create new stages using dozens of block types, enemies and gimmicks unlocked as they play through the game. Players can share their own stages and download endless original creations from around the world on Steam Workshop.

Bubble Bobble 4 Friends: The Baron’s Workshop doesn’t have a release date yet, though Taito says you’ll be playing it before the summer is out on Steam. Expect 1-4 player couch co-op, 100 stages, multiple modes of play, and of course that creation suite.

Jason's been knee deep in videogames since he was but a lad. Cutting his teeth on the pixely glory that was the Atari 2600, he's been hack'n'slashing and shoot'em'uping ever since. Mainly an FPS and action guy, Jason enjoys the occasional well crafted title from every genre.
@jason_tas
Previous Coming Up: The games of August 2021
Next War of the Bounty Hunters to get special “blueprint” variants