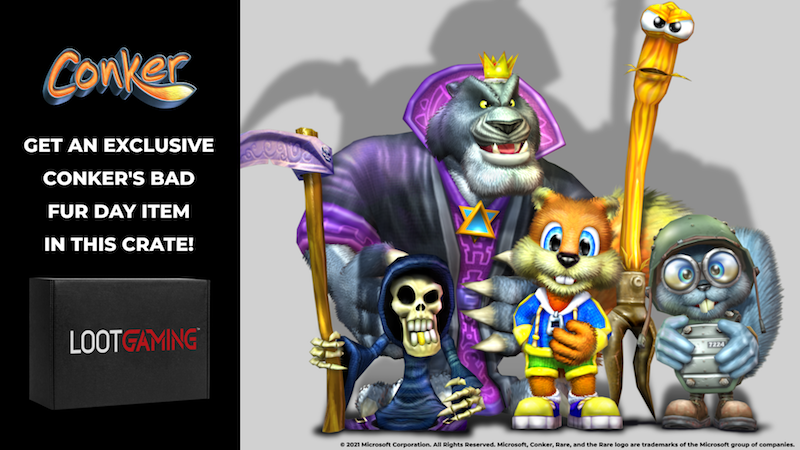 Home / Collectables / Loot Gaming is getting salty this month

Loot Gaming is getting salty this month

Everybody gets a little salty now and then, about something. And this month, it’s Loot Gaming’s turn, with the likes of Conker and Sea of Thieves.

These days especially, getting all worked up over something that’s likely nothing is commonplace. You’d think that’d worn off of our collective culture with the year that we just had, but nope. And now the saltiness has officially spread to Loot Crate too. Though, in this case, that’s a good thing.

The mystery crate company has announced that this month’s Loot Gaming offering will have “salty” as a theme, and it looks like it’s loaded with some really neat stuff. That includes a roll of Conker’s Bad Fur Day toilet paper. I mean, come on, that’s hilarious… and fairly timely, now that I think about it.

Why so salty? You’ve worked hard, beaten the game, and proclaimed victory! Now dry those tears with this month’s “Salty” themed Loot Gaming crate. Whether you’ve taken that sweet helicopter ride of victory in Warzone’s Battle Royale or sunk every pirate ship that dares cross your path, you won’t feel crabby when you open this packed Gaming crate stocked with items from Sea of Thieves, Destiny, Call of Duty, and Conker’s Bad Fur Day.

This month’s Loot Gaming crate is filled with a vial of salty tears of exclusives including a Sea of Thieves T-shirt, a roll of Great & Mighty Poo TP, Call of Duty Warzone Keychain, Destiny Gambit Coins and more. There’s even a premium Street Fighter add-on plush of Ken, Ryu or Chun-Li to keep you in for another round.

While all of this sounds great, remember that these Crates do tend to sell out. So if you want in on the action, you might want to click over to Loot Crate’s site and sub up sooner than later. Officially though, the Gaming Crate will be on sale till April 27th at 9:00pm pacific time. It’ll run you $28.95 USD as a solo purchase.

Jason's been knee deep in videogames since he was but a lad. Cutting his teeth on the pixely glory that was the Atari 2600, he's been hack'n'slashing and shoot'em'uping ever since. Mainly an FPS and action guy, Jason enjoys the occasional well crafted title from every genre.
@jason_tas
Previous John Romita Jr. returns to Marvel Comics for new mystery event
Next Trailer: See the team come together in DC’s Justice Society: World War II