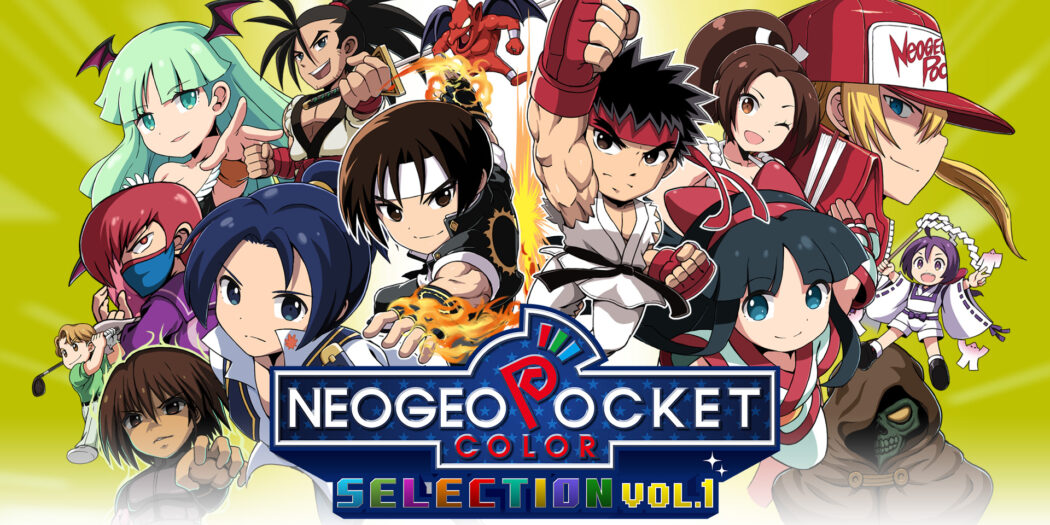 Like a virtual library all wrapped up in one set. SNK’s NeoGeo Pocket Switch ports come together with some all-new additions for a 10 game pack.

If you haven’t been paying attention, the Nintendo Switch has been on the receiving end of some pretty great ports from the NeoGeo Pocket. SNK’s handheld console from the late 90s/early 2k’s, the NGP was loaded with great handheld titles.

You’re forgiven if you haven’t really heard much about it though. The little guy was maybe even more niche than its big brother, the NeoGeo home console. I’m happy to say that I had one, still do, and it remains an excellent little portable.

The library was aces too, and included titles like King of Fighters, SNK vs Capcom, Metal Slug and more. With the Switch ports thus far, we’ve seen a bunch of those games make the jump for a new generation to enjoy. Well, fast-forward to this month and there are even more of them, and all loaded into one neat and tidy little collection.

Bringing back the classics

The base premise of all collected-editions is pretty simple. It’s to bring together a set of related games that’ve been previously made available elsewhere, but for a new console or audience. Kind of obvious, that. In the case of the NeoGeo Pocket Color Selection Vol.1, it’s a little of both. And that’s a pretty unique situation, especially when you consider the names here. But even huge fans of Metal Slug might not’ve played these versions.

The NGP was a whole different animal, and provided a unique spin on its games. As I mentioned though, the names here will absolutely ring a bell. You’re of course familiar with the aforementioned Metal Slug. But whereas you might know that series well, the Pocket Color version will feel like a completely different experience.

All of Selection Vol.1’s games share that same vibe. It’s thanks to the very different graphical look that almost every SNK game on the portable had. But we’ll get to that.

All in all, the collection includes:

Regular readers of BG might have read reviews of a few of those games right here already. Remember, some of these have already seen publication separately, but take a look at that list and you’ll see that most of them haven’t.

Basically, if you want to play some Metal Slug or Dark Arms via your Switch, this collection is the only way.

There honestly isn’t too much to say about the play control in NeoGeo Pocket Color Selection Vol.1. It’s great, I guess would be all I can conclude. There’s a pretty big but though, and fans of formerly portable games should know where this is going. Basically, don’t expect deep control schemes on any of the games in this set. Remember, these are handheld games from an era when handhelds weren’t very complex in terms of buttons.

While I haven’t beaten all of the games in this set, I did try them all as a part of this review. And as far as gameplay goes, all of the ones that I remember playing on my Pocket years ago feel spot on. The Pocket Color did a great job across the boards to making a lot out of it’s simple button layout, and it had a great gamepad/stick like thing too.

The Switch setup is different of course. But it works just as well, even though most of the buttons are unused. Again though, none of the included games include overly complex control layouts, not that that’s a bad thing since these are portable titles.

Much like the gameplay, the looks of the games included are streamlined from the arcades or home console versions. That’s true for all for the NeoGeo Pocket Color’s titles, but also like in referencing the gameplay, it’s not a knock. If you haven’t played with the Pocket Color, the capabilities of that console were very similar to the GameBoy Color. You can see right here what I mean, as the game’s color palette is streamlined and its sprites done in a cartoonish style.

The NGP had an almost universal look to its SNK-published titles, that fit that mold. It might be a bit of an acquired taste, in all honesty. Though I have to mention too, that the included Metal Slug games’ designs look fairly identical to other editions. So if you’re a fan of those games, as I am, then you’re in for a much more faithful experience to what you’re probably used to.

Along with the games, there are also a number of visual options that you have. Those come by way of virtual representations of the NeoGeo Pocket console itself. I’ve mentioned this in past reviews, but it’s just so freaking cool that it needs to be pointed out again.

You can overlay NeoGeo Pocket consoles on the Switch’s screen. This gives the feel of playing on an NGP console, even though you’re playing on your Switch. Even cooler, there are a bunch of consoles available, so if you had one in the past, you just might find a facsimile of your console. I’ll mention too though, that you can do away with all of the above and just play with a zoomed-in screen too. Up to you.

Oh, and did I mention that you have different versions available for each game? Have some good memories of the black and white, NeoGeo Pocket version of a game? You can do that.

If you’re a fan of the NeoGeo Pocket, or just intrigued by one of the most under-appreciated handhelds ever, then you need to check out what SNK has done here. The NeoGeo Pocket Color Selection Vol.1 is packed with great titles, and both plays and looks authentic to the included titles’ original releases. I wish it included even more titles, but then again, I suppose that’s where that “Vol.1” tag comes in.

A copy of NeoGeo Pocket Color Selection Vol.1 was provided by SNK for this review

Jason's been knee deep in videogames since he was but a lad. Cutting his teeth on the pixely glory that was the Atari 2600, he's been hack'n'slashing and shoot'em'uping ever since. Mainly an FPS and action guy, Jason enjoys the occasional well crafted title from every genre.
@jason_tas
Previous Trailer: Collect souls as a crow in gorgeous-looking actioner Death’s Door
Next PAX East canned one more time, PAX Online hits this July