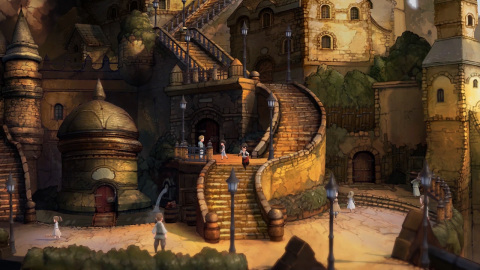 Some great games hitting the Switch this week, and it might just be the first week in 2021 that I feel comfortable saying that. Not only are there big names, but also a pretty big number of games in general.

Bravely Default II is Nintendo’s headliner of the week, and it’s a solid choice. The RPG is a terrific looking one, and comes complete with a strategic battle system. Your party will engage in turn-based battles, making it sound like it might be as much of a strategy game as an RPG.

Not to be forgotten though, is Capcom’s Ghouls ‘n Ghosts Resurrection. A rebirth for the classic side-scrolling series, GNGR offers up all the modern niceties, including a difficulty option. So if you came painfully close to beating the original, time after time, and never ever made it… well this just might be your game.

And finishing off the three-headed serpent of new games this week is Blizzard Arcade Collection. Not really talked up too much, this collected edition of games gives you several versions each of Blackthorne, The Lost Vikings and Rock N Roll Racing.

Finally, there’s a tidal wave of smaller releases as well. There’s nothing to really highlight there, but there’s a bunch of them regardless. Scroll down to check ’em out.

Jason's been knee deep in videogames since he was but a lad. Cutting his teeth on the pixely glory that was the Atari 2600, he's been hack'n'slashing and shoot'em'uping ever since. Mainly an FPS and action guy, Jason enjoys the occasional well crafted title from every genre.
@jason_tas
Previous Ghosts ‘n Goblins Resurrection out now on Switch
Next Hot Wheels Unleashed racing onto consoles and PC this fall