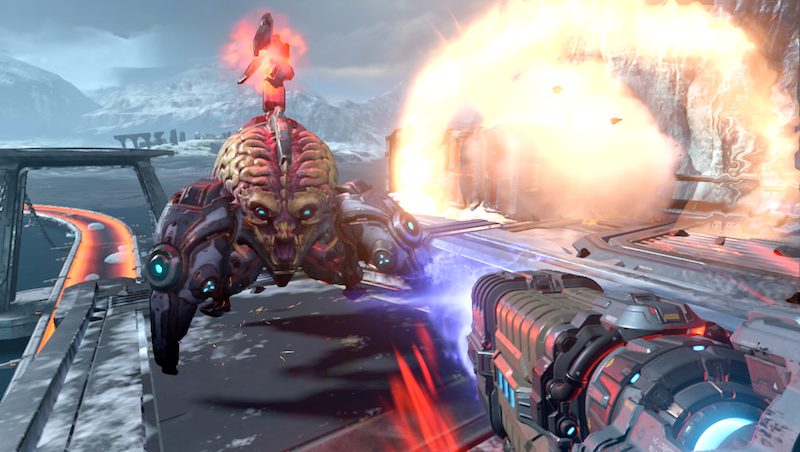 Home / News / Hell returns to the Switch, as Doom Eternal hits next week

Bethesda has finally dated Doom Eternal, and it has something of a shocker of a launch date. The blood-soaked FPS officially arrives next week.

Delayed into seemingly oblivion, there was still little doubt that the sequel to the 2016-released, series-reinventing Doom would eventually hit the Nintendo Switch. After all, Bethesda managed to port it predecessor to the Switch hardware, so Doom Eternal shouldn’t be too massive of a challenge.

Yet as month after month passed, more and more distance was put between the March 2020 release of Doom Eternal. It was kind of looking like the Switch port wasn’t going to happen till ’21. And yet, here we are with a surprise announcement that it’s not only still coming up, but launching next week.

Experience the ultimate combination of speed and power in DOOM Eternal with the next leap in first-person combat powered by idTech 7. Armed with a shoulder-mounted flamethrower, wrist-mounted blade, upgraded guns, new abilities and more, you’re the greatest
demon slayer in existence.

Looking pretty sharp honestly. And I suppose it should, since it was made in partnership with Panic Studio. If you don’t know that name off hand, it’s the same studio that developed DOOM (2016), Wolfenstein II: The New Colossus, and Wolfenstein: Youngblood to the Switch. So they know what they’re doing with Bethesda’s FPS’ and Nintendo’s Switch.

Panic has worked in some new stuff for the Switch edition of Eternal too. As with past releases, gamers can expect to see motion aiming. So if you’re looking for something a little more akin to mouse control, then that might be your ticket (but expect a learning-curve).

So when exactly can you expect to be playing Doom Eternal on your Nintendo hybrid-handheld? That’d be December 8th.

Jason's been knee deep in videogames since he was but a lad. Cutting his teeth on the pixely glory that was the Atari 2600, he's been hack'n'slashing and shoot'em'uping ever since. Mainly an FPS and action guy, Jason enjoys the occasional well crafted title from every genre.
@jason_tas
Previous Trailer: “Fractured Steel” reveals the Steel Dawn in Fallout 76
Next Hwang joins season pass 2 for Soul Calibur VI