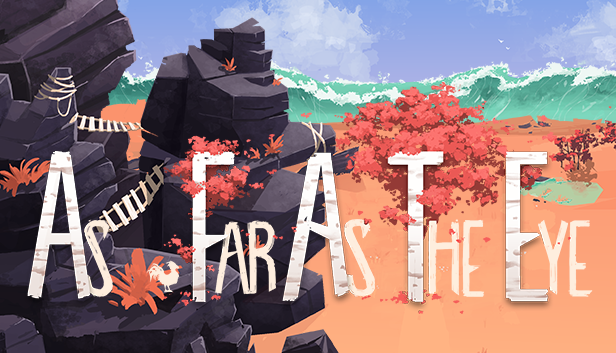 It is always nice to go into a review title with expectations and have them challenged. Well, not always obviously, but the surprise is usually good.

That lukewarm opening is a fair representation of my feelings toward As Far As The Eye. I went into it expecting a fairly generic Turn Based Strategy game with colourful sprites and levels. What I got, however, was more of a puzzle game than anything, and I was pleasantly surprised.

In AFATE you witness the journey of a tribe of shapeshifters who must escape a flood. Each of these tribe members, referred to in-game as pupils, takes the form of an animal most suited to their current task. Red panda for gathering, bird for building and so on, which you must utilize in order to lead your tribe to a place that’s safe from said flood, known as The Eye.

There’s a strange, almost storybook-like text window before each level in the campaign. Generally, these windows give a little description of certain pupils, with their own dreams and aspirations on a journey to this safe zone. However, it’s essentially window dressing.

The game itself never really references the story in gameplay. It exists solely as a premise, a concept used to explain what you are doing. I personally hate text boxes. They make it feel like the story is happening in a separate dimension. That being said, the game doesn’t really need an involved story, and the tone it sets through the text boxes is sufficient.

AFATE takes place generally in small biomes full of resources. After choosing a spot where your caravan will set up, you command a small number of pupils to gather resources and build the stations necessary to gather said resources or gather them more efficiently. So far, so TBS.

The interesting part of AFATE is that each pupil excels at different tasks, and each comes into play with a unique passive ability. You have to utilise these pupils to get resources as quickly as possible, upgrading their abilities, as after a few turns your biome will flood.

You continue to move from biome to biome, completing all the necessary tasks to get to the next one, and securing the safest or quickest route to the Eye. It makes for an interesting experience that sets AFATE apart from other TBS games.

I mentioned earlier that this reminded me more of a puzzle game, but really that only applies to the campaign. I kept getting stuck on a level because you seem to need to follow a specific set of steps in order to succeed. The “free-play” mode, on the other hand, is a bit more like a rogue-like.

I have to say, it is very nice to be able to get into a game like this and be handed a random selection of pupils I have to make do with. It’s the kind of game where you can just jump into the free-play mode, entitled “game”, and work to get to the end in whichever way you want.

Then, if you’re feeling like more of a directed experience, the campaign offers a bit of premise and an interesting almost puzzle-like feel. I do have to mention, however, that the campaign is more of a tutorial. It gets annoying to have to skip all the tutorial messages while playing, but that isn’t much of a deal breaker.

This game is so calming. Everything feels soft and arty, from the pupil’s sprites to the lovely ambient music. It’s always a worry with games like this that the music will eventually get old, but I found it soothing to the point that I couldn’t get mad when I failed a level.

The visuals have functionality in mind as well. Each map is split into hexagonal zones with plains, rocky hills or resources in them. Every resource is immediately recognizable, which can make or break a game like this. Even the UI manages to be engaging without being too cluttered.

This is not my longest review, but some games don’t need long winded explanations of every feature. As Far As The Eye is simply a solid game. It works well and I struggled to find anything to complain about while playing. I will certainly be jumping back into it after a long day, just for a quick and calming Turn Based Strategy experience. I can warmly recommend it.

Turn Based Strategy that doesn't expressly feel like Turn Based Strategy... not ll the time anyway. As Far As The Eye is a beautiful, relaxing game that delivers on the simple premise of moving your nomadic tribe from home to home, all while escaping an ever-encroaching flood.

Young, talented, funny, hard working, duck-like, consistently punning, the center of a collapsing star, older than time and weird. He is two of these things. Beyond that, I'll never tell...
Previous Toy Fair set to return in 2021
Next Trailer: The Haunting of the Mary Celeste adapts a true story for a timely scare