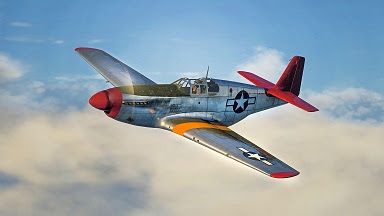 The famed Tuskegee Airmen arrive in online action-game War Thunder. They’re not alone, as the update brings multiple new units. to the fight.

Take to the skies

The “Raining Fire” Content Update brings the P-51C variant of the P-51 Mustang that was used by the Tuskegee Airmen, the first African-American military aviators in the United States Armed Forces. They trained at Tuskegee, Alabama and bravely fought to free Italy and the whole of Europe from nazism during World War II. The Tuskegee Airmen’s aircraft had the distinctive “Red Tails” camouflage that is carefully recreated in War Thunder to acknowledge the plane, its history and the 79th anniversary of the first solo flight of an African-American officer that was performed on September 2, 1941 by CPT Benjamin O. Davis, Jr. There are also a couple more interesting WW2-era planes that American aviation fans have been asking about for a long time. The US P-47D-22 RE and the British Thunderbolt Mk.I. are the earlier models of the Thunderbolt. They distinguish themselves from the familiar later models with their signature ‘Razorback’ design – the original design of the P-47 prior to the introduction of the bubble canopy with the D-25 variant.

War Thunder is out now for the Xbox One, PS4, and PC.

Jason's been knee deep in videogames since he was but a lad. Cutting his teeth on the pixely glory that was the Atari 2600, he's been hack'n'slashing and shoot'em'uping ever since. Mainly an FPS and action guy, Jason enjoys the occasional well crafted title from every genre.
@jason_tas
Previous Trailer: Ary and the Secret of Seasons
Next Trailer: Take a first look at No Time to Die