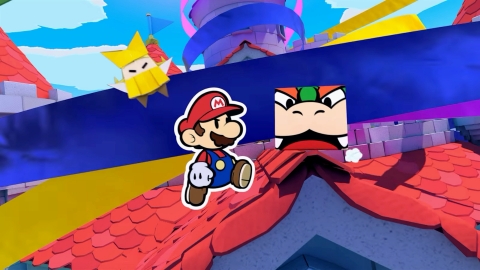 Paper Mario continues to be an odd little sub-series in the Mario-multiverse. With the latest release, a surprise announcement a few months back, Nintendo is kicking the weirdness up a bit.

Now Paper Mario’s world is set to include some fold-happy villains in the form of the Origami King and his cohorts. Presumably, that means that the new game will center on paper-folding as its main gimmick.

Aside from the paper plumber, there isn’t much else landing on the Switch this week. Fans do get Warhammer 40K: Mechanicus, as well as the arcade version of Gradius, but that’s about it. Everything else is decidedly smaller in terms of appeal.

Jason's been knee deep in videogames since he was but a lad. Cutting his teeth on the pixely glory that was the Atari 2600, he's been hack'n'slashing and shoot'em'uping ever since. Mainly an FPS and action guy, Jason enjoys the occasional well crafted title from every genre.
@jason_tas
Previous Nintendo and LEGO unveil new NES model
Next McFarlane adds on to Cyberpunk 2077 line